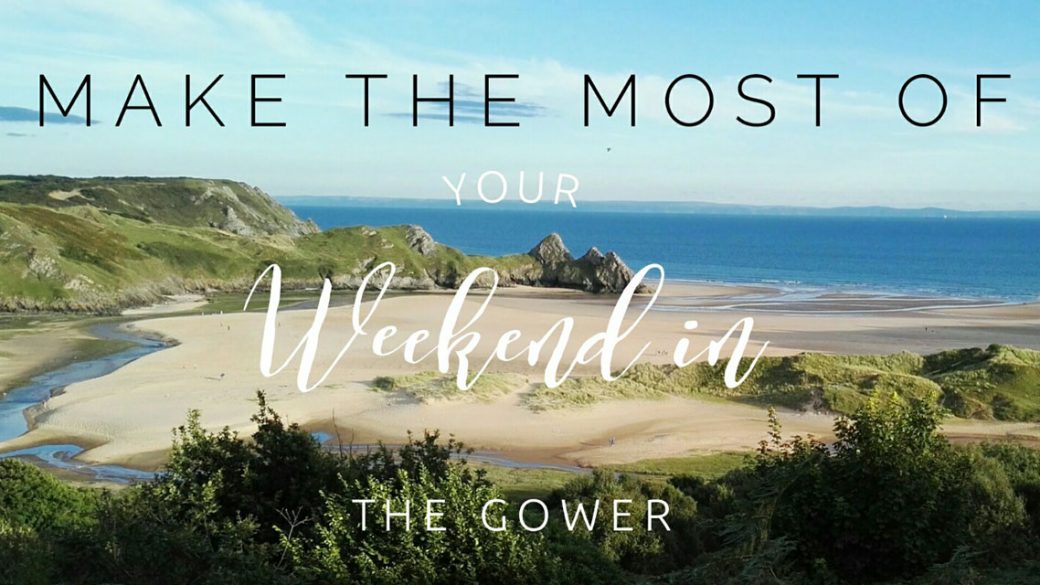 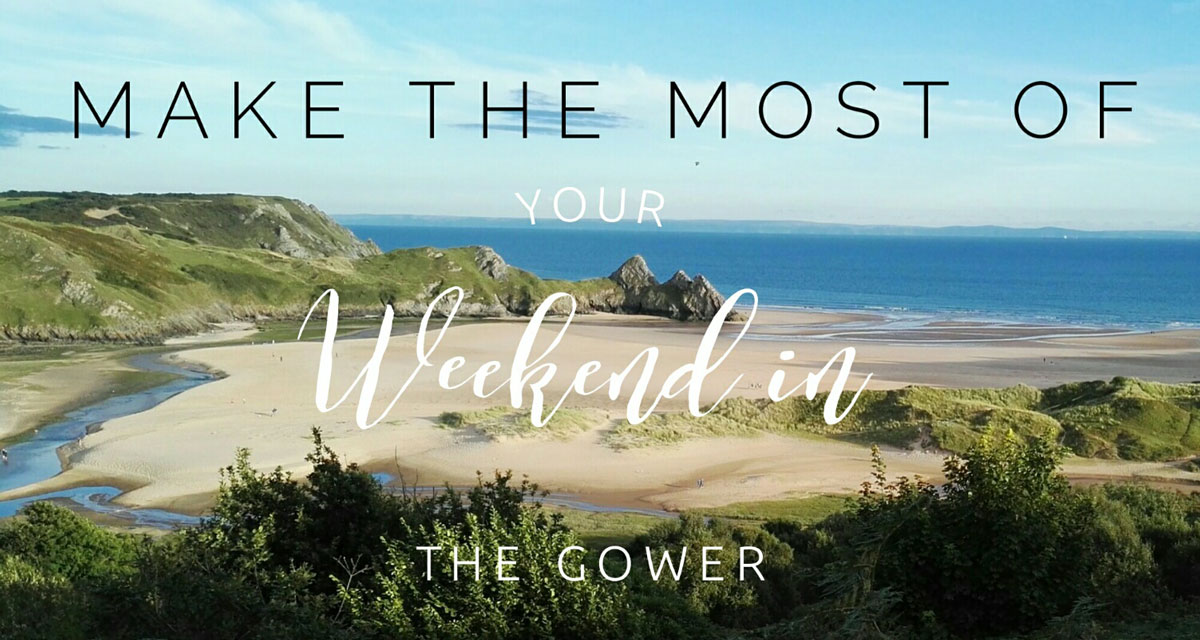 Earlier in the year, I went to the Gower Peninsula and fell in love with its beaches. If you haven’t come across it before, the Gower is situated just over the border in Wales and is home to some of Britain’s best coastal scenery. Everyone who goes there has a favourite beach. From the famous Rhossili Bay to the tiny Bracelet Bay and the wide and wonderful Oxwich.

The Gower is an ideal location for all you adventure junkies as well as nature lovers. Dolphin, seal and porpoises are regular visitors and the coastline offers excellent surf and areas for rock climbing. If you’re planning a trip, check my five must-see places on the Gower Peninsula.

The Worm’s Head is one of the Gower’s most iconic landmarks. Historically named ‘Wurm’ meaning ‘dragon’ by Viking invaders, it’s a piece of land that marks the most westerly tip of Gower. The island is joined to the mainland by a rocky causeway, which you can cross at low tide. The walk across is highly recommended and there are thousands of natural rock pools you can explore along the way. At the end of the Worm’s Head, look out for the natural rock bridge called ‘Devil’s Bridge’—it’s quite the balancing act!

Look out for seals here. I saw lots bobbing up and down near the rocks. It’s also a good place to look for dolphin and porpoises, who both frequent here in the summer months.

Once you’ve returned to the mainland you can join one of the many coastal walkings paths, or you can return to explore Rhossili Bay. When I went, the weather was absolutely stunning which showcased the bay in all its glory. Rhossili is a huge stretch of flat sand ideal for walking. Check out the remains of the Helvetia shipwreck that lies sunken in the sand. It dates back to 1887! 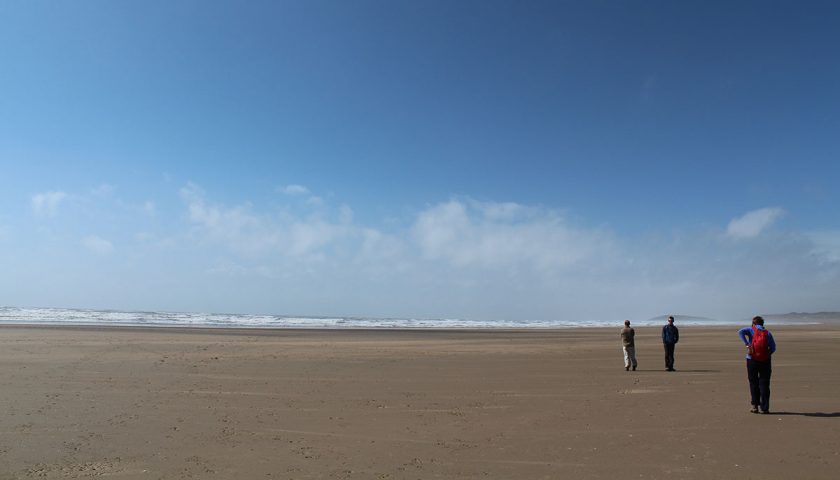 If you’re into surfing, Rhossili is only really surfable at high tide, but the northern half of the bay, known as Llangennith Sands, is the best-known area for surfing in Wales. Surfable at all stages of the tide, Llangennith is the first place on the peninsula to pick up the swell.

Out of all the places I went, this one was by far my favourite bay! I think many people agree, as it’s one of the most photographed places on the peninsula. Due to its popularity, I recommend visiting off season. I went early June, the weather was stunning, while a little chilly, and there were only a small handful of people walking along the beach.

At very low waters it is possible to walk along the sands of Pobbles Beach, Three Cliffs Bay, Tor Bay and Oxwich Bay without a break!

The bay is a wonderful place to eat your packed lunch. I climbed up the rocky path at the back of the beach, for a bird’s eye view of the bay. 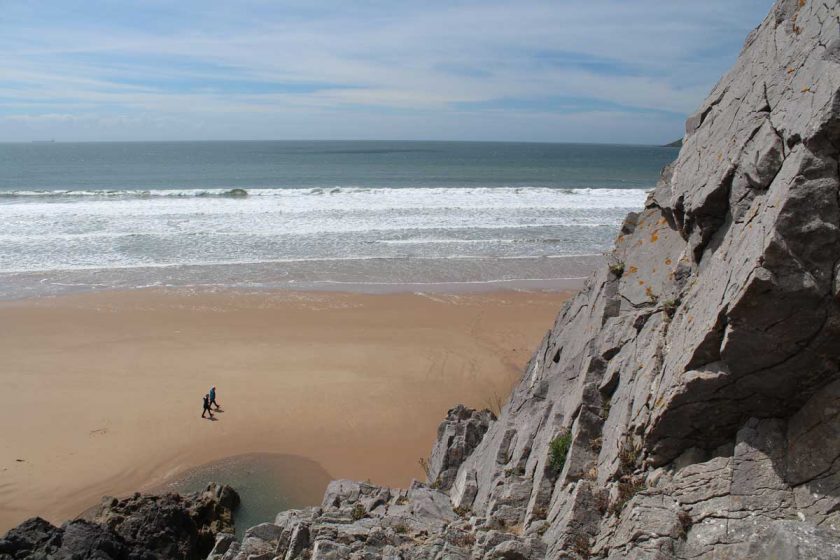 If you’re into rock climbing, then Port Eynon is a great place for both intermediates and advanced climbers. The cliffs west of Port Eynon offer the best coastline scenery in Gower, with a great range of routes. Boiler Slab is perhaps the best-known crag of this limestone region as it hosts up to 15 separate climbs. These range from one of Gower’s easiest climbs, called Classic, to an extremely severe route, named Middle Age Dread.

Instead of climbing, I took the opportunity to walk out onto Port Eynon Point, which looked just like a lunar landscape. From here, I walked over the top of the Point, and down to Overton Mere and Culver Hole.

Overton Mere is a rocky plateau, filled with rock pools and is a great place for bird watching. I saw lots of different birds, including an Oystercatcher, swooping from the cliffs to the water’s edge. Culver Hole is hidden in the cliffs on the eastern side. The unusual cave was originally a dovecote in the 13th / 14th Century, that was later rumoured to be used as a smuggler’s hideout. It’s definitely worth a visit!

Arthur’s Stone is a Neolithic burial tomb dating back to 2500 B.C. It was one of the first sites to be protected under the Ancient Monuments Act of 1882 and has been a famous attraction for over half a millennium. It was listed as one of the “three mighty achievements of the Isle of Britain” in the 16th Century (the other two being the Stonehenge and Silbury Hill monuments).

To get here, I parked and started my walk from the national trust car park in Penmaen. The walk, to Arthur’s stone, took just over an hour and offered spectacular views of the south Gower coast.

A route map of my walk:

Pick up the footpath from the carpark. It will take you along the Cefn Bryn ridge with wonderful views back to Oxwich Bay. Continue towards Cefn Bryn Common and then onto Arthur’s Stone.  Look out for wild ponies and horses in this area. There is also the Broad Pool nature reserve nearby, where you can see lots of wetland birds and dragonflies.

From Arthur’s Stone, you could continue along the ridge to Ryer’s Down and Llanmadoc. This takes an extra hour and a half to walk, but the view to the lighthouse at Whiteford Point is amazing. You’ll also come across Whiteford Sands Nature Reserve, with woodland and sand dunes to explore.

Clyne Valley Country Park lies just on the edge of the Gower, next to Swansea. Within its 700 acres, you will find a very varied landscape ranging from open and wooded hillsides to steep gorges and meadows. It’s a fantastic place to cycle, and you can pick up the track about half way around Swansea Bay.

Until recently Clyne Valley was an important area of industrial activity, and the trackbed of the old London Midland Scottish Railway now forms the park’s main footpath and cycleway. The route dissects the quiet woodland of Clyne Valley and continues through Dunvant to the large community of Gowerton. A return journey is approximately 16 km.

While I opted for the cycle route if you fancy something different, there are a number of water features in the park and the nearby Singleton Park with its beautiful botanical gardens is also well worth visiting.

Have been to the Gower Peninsula recently?
If so, what other places would you add to this itinerary?

Posted in: Explore Tagged: Things To Do| Wales