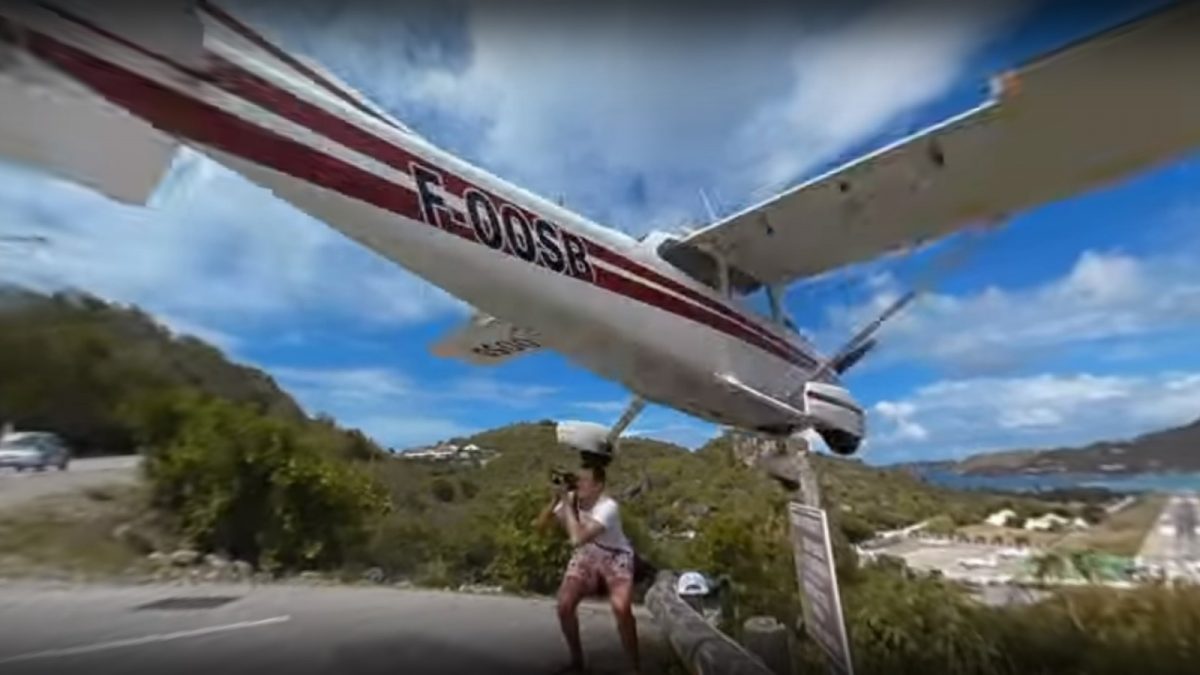 Forget landing gear, this lucky tourist almost found out the meaning of ‘landing ear’ (apologies for the pun) when a plane skimmed (just a couple of inches away from) the top of his head while taking a photo.

Watch the video above to see the amazing scene play out in 360 wonder. Remember to scroll left, right, up and down to explore the 360 scene.

As the light aircraft came in to the Gustaf III Airport in St Barts, one photographer tried to capture a once-in-a-lifetime image. Plane spotter Sébastien Politano caught the incredible scene at what is considered one of the most dangerous airports in the world, renowned for its difficult landing strip.

The photographer in the white t-shirt was crouched and primed with his camera when the aircraft approached the Caribbean runway. As the picturesque Caribbean landscape can be seen in the background, the plane’s wheels graze the crazy photographers hand as it flies overhead.

Sébastien, from Saint Martin, Guadeloupe, said: “The guy showed me the traces of the tyre on his hand afterwards.

“He kept saying ‘it hit my hand’ but I didn’t believe him.

“It was only when I saw the footage afterwards and saw how close it came that I believed him.

“I don’t think he knows how lucky he was it didn’t hit him harder.”

Sébastien was testing out his new 360-degree camera when he was forced to take cover a few feet away. He doesn’t know the other man, describing him only as a tourist, but it appeared the guy enjoyed his brush with the plane. After surviving the glancing blow, he continued to take photos of the aircraft while smiling to Sébastien.

The runway in St Barts isn’t long enough to accommodate large passenger jets and is mainly used by regional airlines or charter companies operating turboprop planes on flights to and from other Caribbean islands. Its landing strip is so short that pilots must have special training just to be able to land there.