There’s nothing quite as amazing as standing outside at night, staring up, and seeing millions of stars spread across the dark expanse of sky. It’s a reminder of the enormity of the galaxy and our minuscule position in the universe. It’s also an experience that is quickly disappearing from the world.

One hundred years ago, no matter where you lived, if you stood outside of your home at night and looked up, you would be able to see millions of stars and the bright swath of the Milky Way cutting across the darkness. Today, 80 percent of the world’s population lives under skyglow which is when man-made light floods the atmosphere, causing the sky to glow and effectively erasing the stars from our sight. In the United States and Europe, the rate bumps to nearly 99 percent of each region’s population. Light pollution now blocks views of the Milky Way from almost 80 percent of North Americans.

Looking at a picture of North America at night taken from the International Space Station, it’s easy to see why this has become the case. The photo shows huge patches of the continent where light is so powerful that the regions seem to glow. On cloudy nights, the moisture can cause light to bounce back, creating a red tint to the sky, making it seem like it’s actually glowing. This is light pollution.

Light pollution is caused by the inefficiencies of the many lights people install on their houses and businesses. In an attempt to brighten the night and erase the darkness at street level, humans have also erased the sky. While the intention is to shed light on the ground or surrounding areas, much of the light shoots in the wrong direction, including straight into the sky. Light from urban areas can extend over 100 miles, impacting neighbourhoods and regions that may not even be that well lit on their own. At night, the lights from Los Angeles are visible to airplanes 200 miles away from the city.

Blackouts or power outages are one way for people to realise how much light pollution exists in their community. The unadulterated night sky is so foreign to city dwellers that, according to an article on PBS about light pollution, after a power outage in Los Angeles in 1994, “Residents reportedly called 911 to express alarm about strange clouds hovering overhead.” These clouds were the Milky Way, a celestial sight that was finally visible in the light-polluted city.

Dark skies and the ability to see stars at night are not, however, a thing of the past. Thanks to the work of the International Dark-Sky Association, there are now parks and towns worldwide where you can experience the night sky without the interference of man-made light. 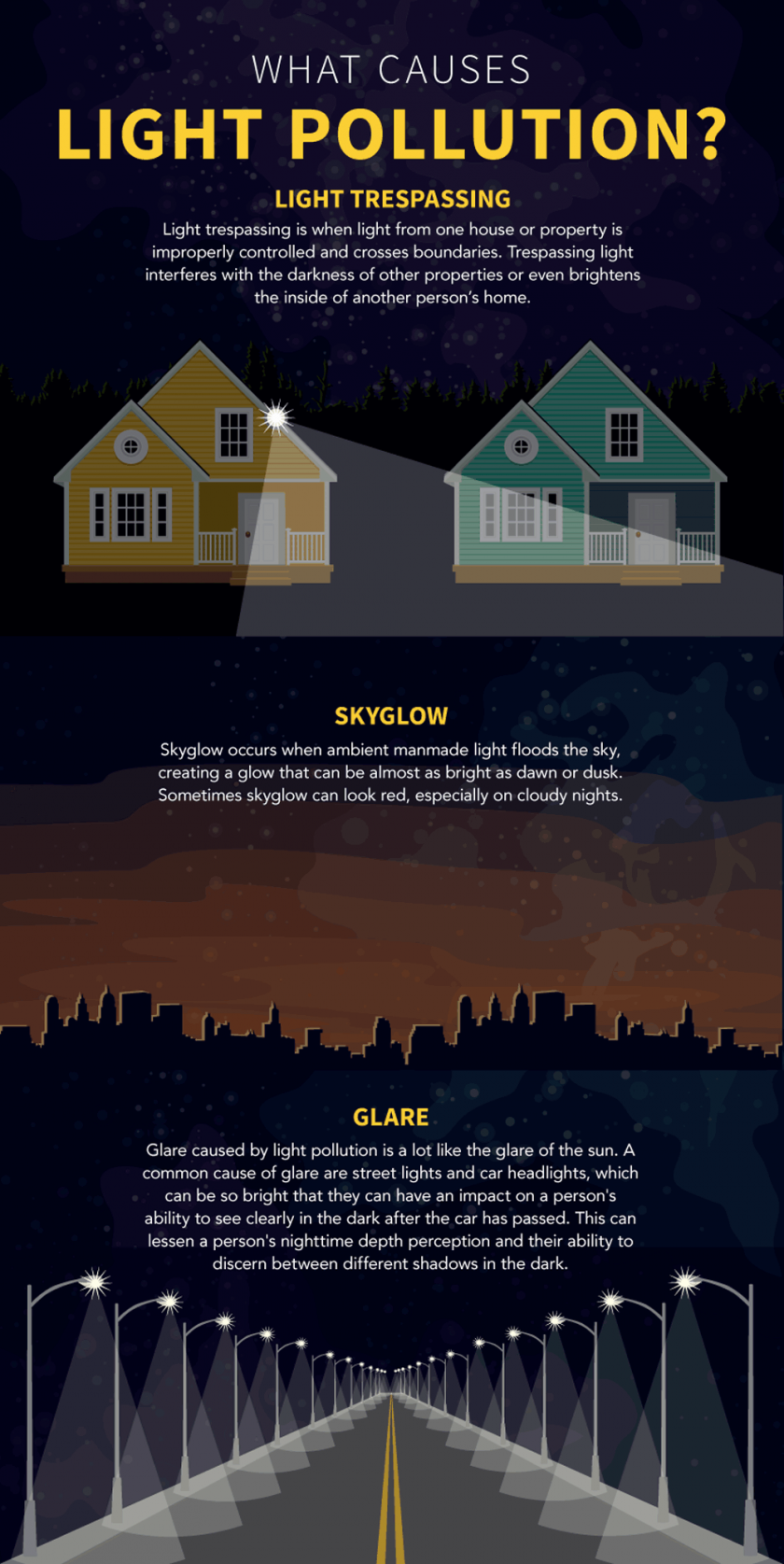 The International Dark-Sky Association has been working to establish and recognise regions, including everything from entire parks to housing developments, which have responsible lighting policies that help create and protect dark skies. Their program divides its designations into five categories: International Dark Sky Communities, Parks, Reserves, Sanctuaries, and Developments of Distinction (which are subdivisions or unincorporated townships). To qualify in one of these categories, communities or parks must apply to be certified. Your community or neighbourhood could make changes to its lighting and apply to be a Dark Sky Community.

Many of the International Dark Sky Parks in North America are in the American West and Southwest, where large swaths of land are un- or under-populated. Much of this land is desert, which is perfect for stargazing because the lack of tall trees makes it easier to see an unobstructed view of a huge sky. Other good environments include areas near the ocean or large lakes where there are equally unobstructed expanses of skyline. You don’t necessarily have to travel to any one region to experience a dark sky. Using the directory and map on the IDSP website, you can locate a dark sky locale near your own home.

Officially, a constellation is a strictly defined set of stars. Today there are 88 named constellations in the night sky. Forty-eight of these were first named and described by the ancient Greeks, primarily by the astronomer Ptolemy. The latter forty were discovered and named after exploration to the southern hemisphere became more common in the sixteen and seventeenth centuries. Many of the official names come from Greek mythology; the twelve zodiac signs are each represented by constellations in the sky. If you learn the names and characters of the constellations, the night sky becomes a storybook that only emerges at night. While Greek mythology has dominated the history of constellations, some of the more recognisable star features, like the Big Dipper or Plough, represented a wide variety of shapes and characters to different cultures and therefore have unique names in different regions of the world.

Because of its unique position in the night sky, Polaris, the North Star, has played a crucial role in nighttime navigation in the northern hemisphere; it is not visible in the southern half of the world. While our view of all the other stars shifts during the night as the planet rotates on its axis, Polaris remains stationary because it is located above the north pole of the Earth’s axis. That’s the reason for its common name, the North Star or Pole Star. If you take a series of photos at night with your camera pointed at Polaris, the stars will appear as a series of concentric circles with the North Star at their centre. Polaris is not a particularly bright star, which can make it difficult to locate quickly. However, using the Big and Little Dippers makes finding the North Star a quick task. The Big Dipper, known as the Plough in the UK, is one of the most distinctive star features in the northern hemisphere. The two further stars in the cup of the Big Dipper create a line that points to the North Star, making it a useful guide for navigators.

If stargazing alone doesn’t pique your interest, research the dates of large meteor showers. There’s no better way to improve a starry night than to see a shooting star. Luckily we’ve recently been host to a number of great meteor events and there are plenty more to come. Watching a good meteor shower in a dark sky can mean seeing hundreds of shooting stars (or meteors) an hour! Bring a chair and a blanket and get ready to settle in for an unparalleled sky show.

Posted in: Explore Tagged: How to?| Photography| Stargazing