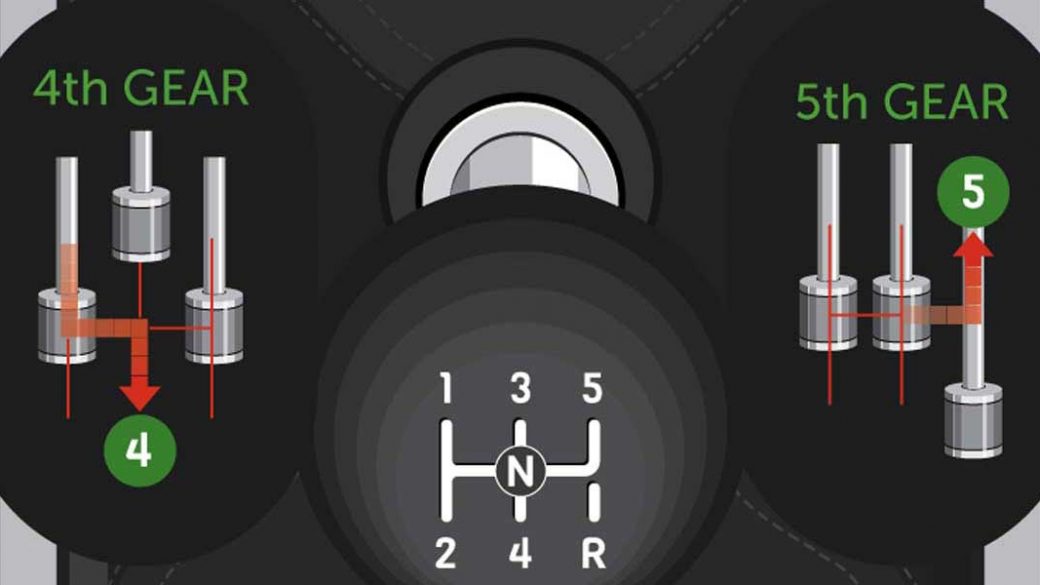 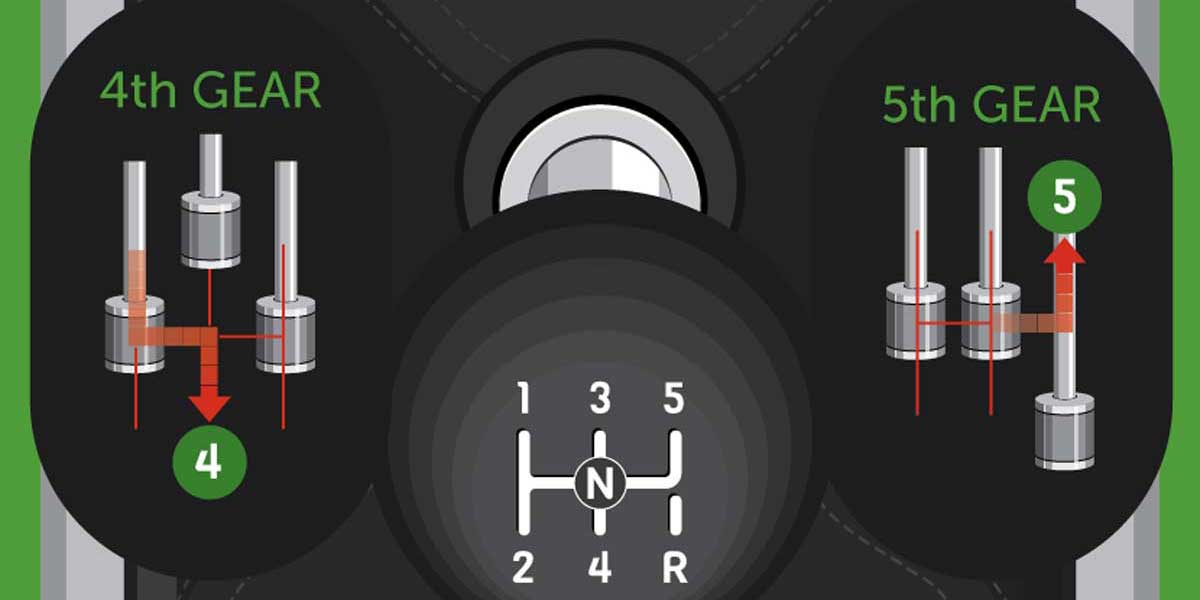 As an avid sim racer, and having learned to drive in the UK, manual transmissions are second nature to me. In fact, I think I would now feel uncomfortable shifting down gears, without utilizing the heel-and-toe shifting technique. However, for many of our US readers, a manual transmission can look daunting. That’s why we’ve partnered with Fix to bring you this handy guide, by Craig Fitzgerald , explaining how and why you should drive a manual.

Just a handful of new cars produced for sale in the U.S. are available with a manual transmission today. About 10 percent of the cars in the marketplace are offered with a manual, and only about 6 percent of the 16 million new cars a year are equipped with a stick. There are plenty of reasons to learn to drive one, though, not least of which is the ability to drive anything that you might need to borrow at some point.

Driving a manual transmission is easy once you get the hang of how it works. Modern manual transmissions are much easier to drive than their older counterparts, too. Most cars that offer manual gearboxes today include a feature that keeps the brakes engaged until you’re ready to drive away, meaning that you won’t roll backwards on a hill the way people used to when they were learning to shift their own gears.

What is a Transmission?

The transmission – or transaxle in a front-wheel-drive car – is the component in your car that directs engine power to the differential, and then on to the wheels so you can drive down the road. Without a transmission, your engine would turn too fast for you to leave from a dead stop, and too slowly to allow you to cruise along at higher speeds. The transmission reduces the speed at which the crankshaft turns so that you can smoothly accelerate from a stop, and then as you shift to higher gear ratios. It also provides the right gear ratio to comfortably climb hills or cruise on the highway.

What is a Clutch?

Learning to Drive a Manual Transmission

If it’s your first time driving a manual transmission, it’s a good idea to learn with an understanding and encouraging friend or family member who already owns a stick. There are plenty of horror stories about people trying to learn to drive a manual on a car they just bought at a dealership. You can do it, but it’s better to practice a bit in a wide-open parking lot, without the pressure of having to learn to drive it in traffic.

Step 1: Familiarize yourself with the equipment

You’ll notice that third pedal on the floor. The accelerator and brake pedals are to the right, and the left-most pedal is the clutch. With the emergency brake on, you can step on the pedal without the engine running to get an idea of how stiff it is. If you didn’t have the emergency brake on, it would be like shifting an automatic into neutral, allowing the car to roll freely.

Next, take a look at the gearshift. It will have a pattern printed on it showing you the number of gears and their locations. In between the gears, the line running laterally is Neutral. With the clutch in and the engine off, you can run the gearshift through the gears to familiarize yourself with how they feel. 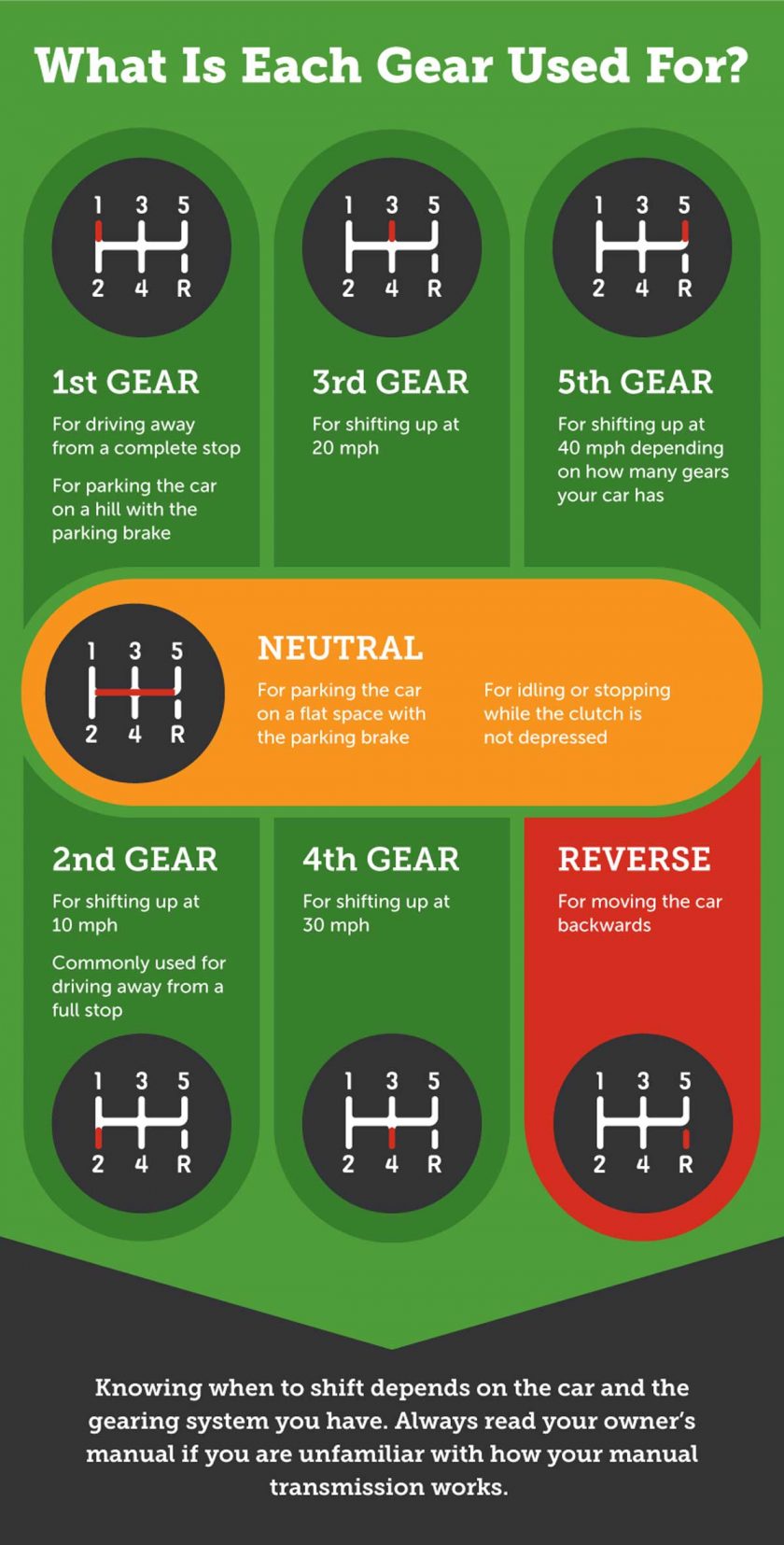 After you’ve familiarized yourself with the gears, find neutral on the transmission. Most modern cars with manual transmissions require that you push the clutch pedal all the way to the floor in order to start the car, and it’s a good idea to do that even if it’s an older car without that safety feature.

Once the car is started, you can put your right foot on the brake and release the parking brake. 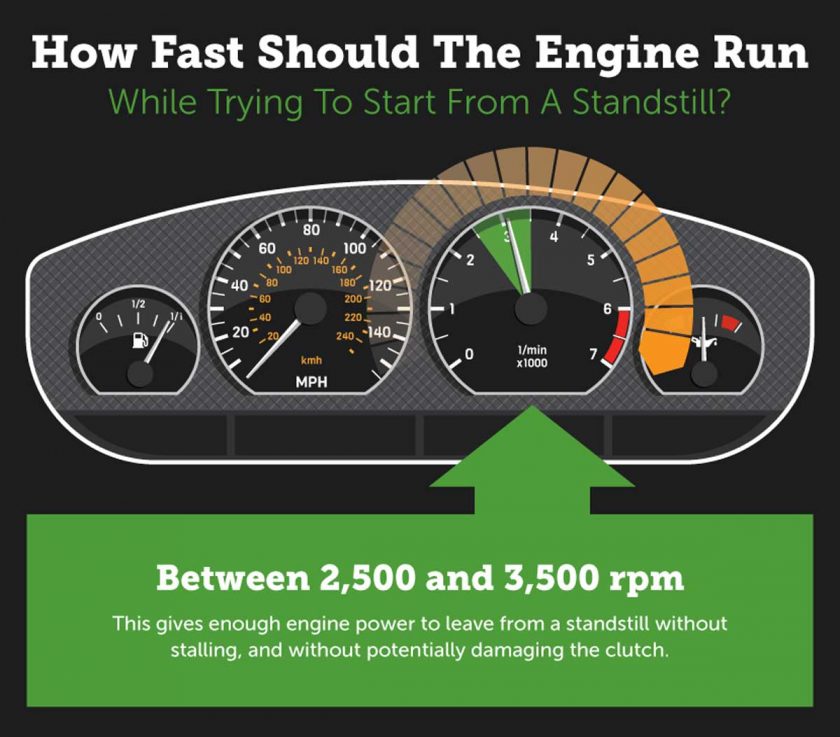 The biggest challenge of learning to drive a manual transmission is executing the dance that allows you to leave a stop in first gear. You’ve got this! It just requires a little patience at first.

With the engine running and the parking brake off, shift the gear selector into first gear.

Two things are going to get you smoothly on your way:

Most cars now have a tachometer, which you shouldn’t spend a lot of time staring at when you’re trying to drive, but as long as you’re in an open space with no cars or obstacles around, it’s OK to look at it for a moment. Squeeze the gas pedal until the engine revs to about 3,000 RPM.

There’s a delicate balance you’re looking for that allows you to maintain a steady engine speed, and smoothly, deliberately release the clutch to get moving. When in doubt, put the clutch all the way to the floor.

Before you try to shift to the next higher gear, practice releasing the clutch in first gear for a while to get a feel for it. The next gears are easy in comparison.

Step 4: Shifting to a Higher Gear

Once the car is rolling and you’re fully off the clutch, accelerate smoothly. For this example, we’re going to shift to the next highest gear in 15 mph increments (i.e., second gear at 15, third gear at 30, fourth gear at 45, etc.).

All the other gearshifts work the same way: Clutch in, shift gears, clutch out.

You don’t actually have to downshift – shifting to a lower gear – but it’s a skill you’ll want to learn so that you’re not relying solely on your brakes to slow the car down. As you’re driving along in any gear, if you let your foot off the gas pedal, the engine’s compression will begin to slow the car down. Selecting the next lower gear and releasing the clutch slows the car down even more.

To downshift, put the clutch all the way to the floor, and select the next lowest gear, then release the clutch pedal. Once the engine speed reduces to around 2,000 RPM, you can shift to the next lower gear.

You also don’t have to go progressively through the gears. You can skip a gear, but know that when you release the clutch, engine RPM is going to be significantly higher and the car will slow down faster than it would if you went to the next lower gear.

Backing up is just like starting out in first gear, and requires exactly the same procedure, except you’ll be going backward, and sometimes getting into reverse requires an extra bit of effort.

Reverse is indicated by the “R” on the gearshift indicator. Depending on the car, you may be able to shift right into reverse, or you may have to push down on the gearshift or push the lever far to one side or the other to engage reverse. That tension is called a “detent,” and it’s there so you avoid shifting into reverse when you’re traveling forward.

Sometimes, reverse gear has a slightly higher numerical ratio, but you’re never wrong to select either first or reverse when parking. Finally, always remember to set the parking brake before you leave the car.

The only way you get better at driving a manual is to drive a manual in traffic. It’s fine to get your feet wet in a parking lot, but getting out in traffic as soon as you can safely do so will make you a better manual driver.

Figure out the things you need to work on – starting on hills, for example – and spend extra time practicing those exercises. You’ll be better in no time.

Article by Craig Fitzgerald, in association with Fix.

Posted in: Motor Tagged: Cars| How to?