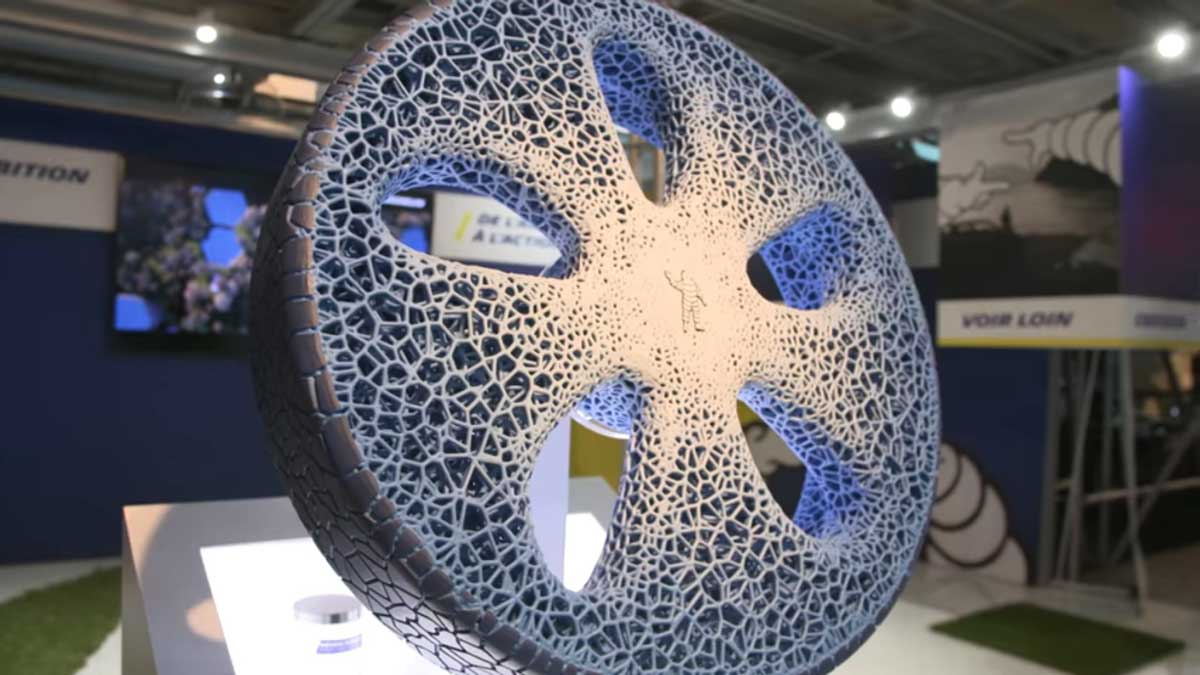 Earlier this month, Michelin—the company behind the chubby white tyre man we all know and love—unveiled a revolutionary new airless tyre concept. The ‘Visionary Concept’ tyre is 3D printed from recycled biodegradable materials and is designed to be the puncture-proof tyre of the future.

The Visionary Concept is actually a tyre and wheel combo. which mimics the structure of coral or the human lung, by being constructed from a number of smaller cells. This biomimetic structure is designed to be generative, meaning that the tyre never needs to be replaced, by enabling fresh tread to be added via 3D printing.

Speaking at the Moving On Conference, in Montreal, Michelin Technical Communication Director Cyrille Roget said: “This is a real revolution.”

Since the tyre is a ‘smart’ tyre, it constantly sends usage information to a smartphone app which keeps the driver informed on the current tread depth and lets them know when the tread needs to be replenished.

Using the power of 3D printing, the tyre also has the ability to switch between multiple tread patterns. So if you need a winter tyre for mountain roads or an offroad tyre for muddy terrain, it’ll be as simple as the push of a button. It all sounds a bit sci-fi at the moment, but when you consider the pace of 3D printing development, the concept begins to look a lot more plausible.

The bike industry has been a bit quicker to adopt the concept of airless tyres—Nexo Tires was successfully funded on Kickstarter last year—but that’s because a car tyre needs to withstand higher forces than a bike tyre and so is more complex to design and develop.

While the Visionary Concept is certainly a plausible design, Michelin’s Executive VP of Research and Development Terry Gettys told Digital Trends that it would be about another decade before it gets to consumers. Considering it would eliminate the need for replacing tyres and manufacturing difficult-to-recycle ones, it’ll be worth the wait.