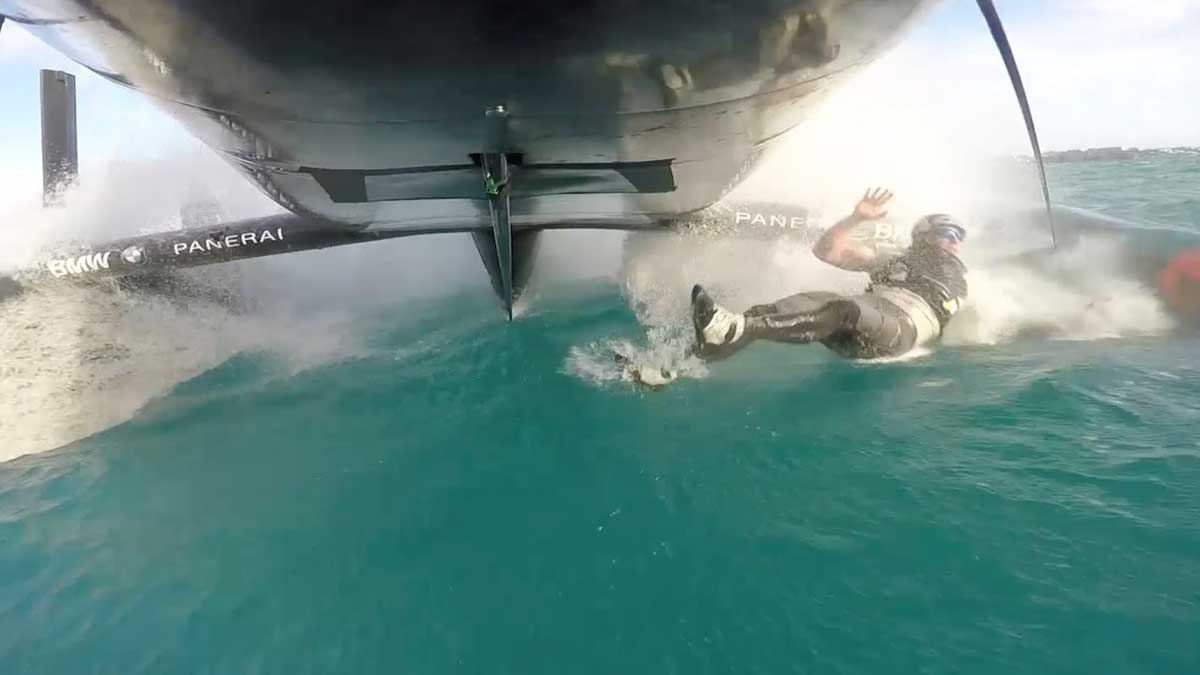 The America’s Cup is the pinnacle of sailing, where teams continually push the boundaries for those extra knot few knots. With this, though, comes extra risk—as an Oracle Team USA crew member found out recently.

During a training run off Bermuda, at high speed, Oracle Team USA Grinder Graeme Spence was thrown overboard in front of the AC50 catamaran. Sail-World reported that Spence was “crossing the platform close to the edge of the main beam when the AC50’s bows dug in as she dropped off her foils, and decelerated suddenly,” which led to Spence being catapulted off the platform and into the water in front of the boat on Wednesday.

Skipper Jimmy Spithill described the incident as the “longest two seconds”. He continued:

Any time you see or hear someone go over the front it’s a real bad feeling. That time from when he goes over the front to when you see him pop back up on the surface and see the thumbs up, always takes too long.

You’re very aware of everything that’s around you – the four foils in the water with you,” Spence said. “I just sort of froze a little bit and then was quite relieved to realise I was out the back of it.

Every day we are constantly reminded of pushing the limits and learning from them.

Luckily, Spence avoided the main daggerboards and rudder foils and, as the New Zealand Herald put it, “narrowly avoided being sliced in half.” He surfaced behind the catamaran with a thumbs up, uninjured and ready to get back onboard.

On the incident, Spence said:

You’re very aware of everything that’s around you—the four foils in the water with you. I just sort of froze a little bit and then was quite relieved to realise I was out the back of the boat.

Sail-World also gave a good review on the safety concerns of the sport:

The dangers of foil-strike are inherent in any man-overboard situation in the various America’s Cup foiling classes. Emirates Team New Zealand lost two grinders off their AC72 during the Louis Vuitton Cup after a mark rounding nosedive incident. Fortunately, then as now there was no injury.

There have been several incidents, not publicly reported, by the teams of foil-strike with sea life.

Rule changes were made in 2013 restricting the length of rudder foils to reduce the risk of crew injury in a man overboard situation.