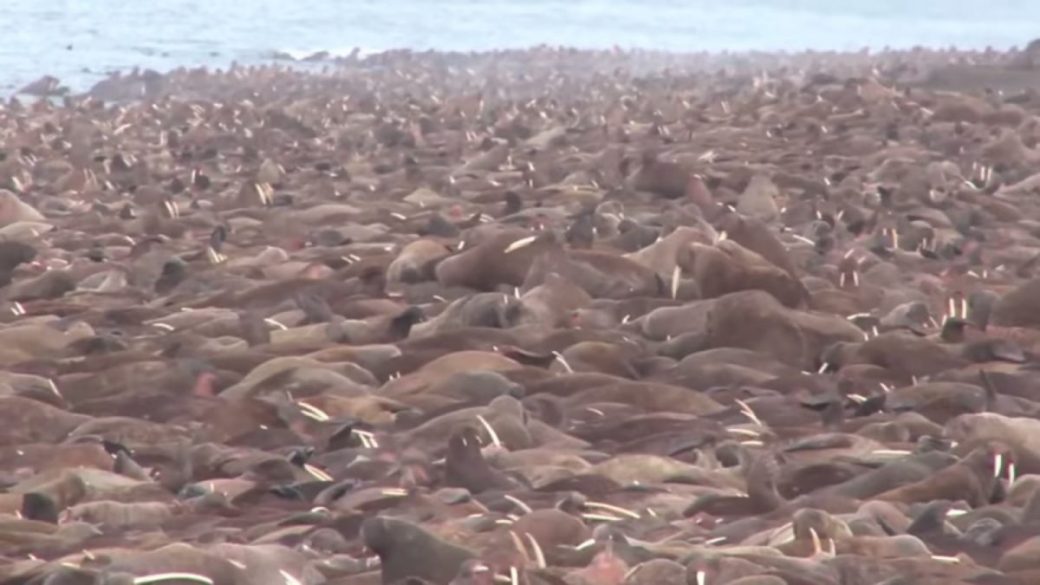 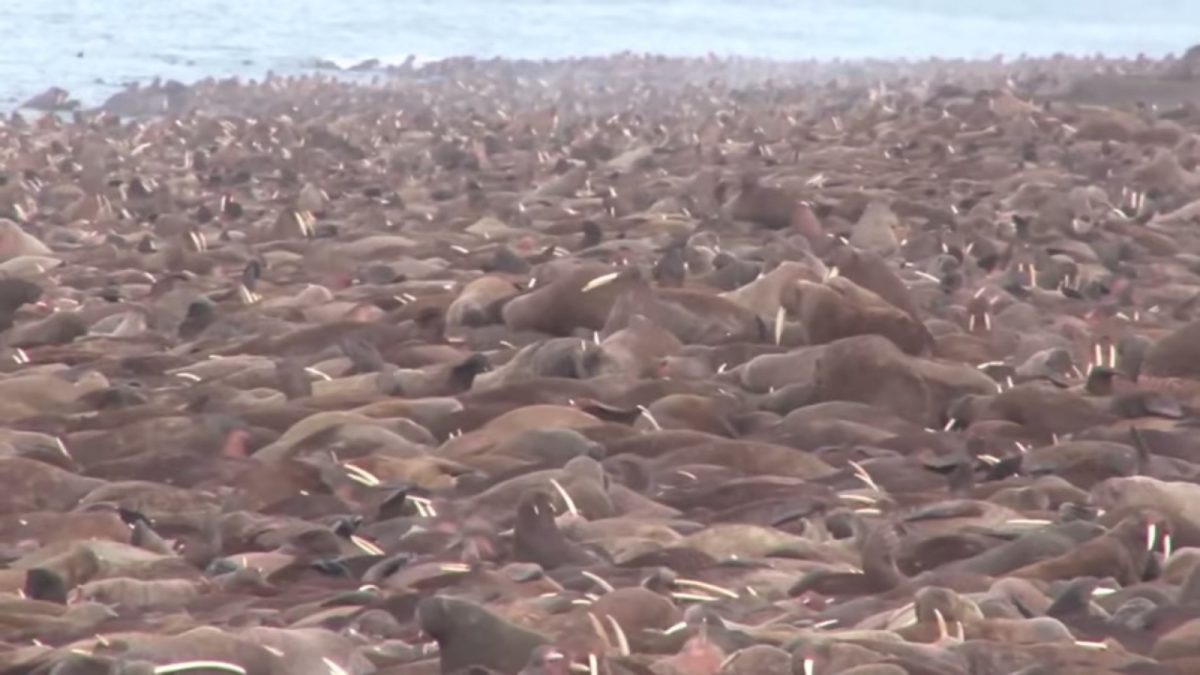 Biologists from the National Oceanic and Atmospheric Administration (NOAA) have photographed the largest gathering of Pacific walruses ever recorded, on a beach in northern Alaska. The gathering, known as a haul-out, consisted of an estimated 35,000 females and calves and happened north of the village of Point Lay, on the Chukchi Sea coast, Alaska at the end of September 2014.

The main cause for the huge Walrus haul-out is likely climate change. Big walrus gatherings have been documented before and while climate change skeptics note this point, scientists say the size of the gatherings are growing as climate change melts Arctic sea ice, depriving walruses of their sunning platforms of choice.

“The walruses are hauling out on land in a spectacle that has become all too common in six of the last eight years as a consequence of climate-induced warming,” the U.S. Geological Survey wrote on their website.

“Summer sea ice is retreating far north of the shallow continental shelf waters of the Chukchi Sea in U.S. and Russian waters, a condition that did not occur a decade ago,” the USGS website details. “To keep up with their normal resting periods between feeding bouts to the seafloor, walruses have simply hauled out onto shore.”

Nation Geographic looks at stats from NASA and explains that as the ocean heats up due to global warming, Arctic sea ice has been locked in a downward spiral. Since the late 1970s, the ice has retreated by 12 percent per decade, worsening after 2007.

According to the National Snow and Ice Data Center, May 2014 represented the third lowest extent of sea ice during that month in the satellite record.

“That’s the reason why we have lost summer Arctic ice,” said Lori Polasek, a marine biologist at the Alaska SeaLife Center, a research and wildlife rehabilitation facility in Seward, Alaska.

Walrus gatherings are also a natural occurrence. Walruses pull their bodies out of the water or ‘haul out’ to rest or warm up on ice platforms or land. While it’s not unusual for males to gather in large numbers on Alaska’s shores, females typically prefer floating ice chunks as places to give birth, leaving calves on the ice when hunting for food.

Polasek explains that “hauling out is partially convenience and partially walrus nature.” This makes sense given that the stretch of beach near Point Lay is close to Hanna Shoal reef, a prey-rich foraging ground.

Walruses are gregarious and tactile animals, swimming side by side in the water and sprawling all over each other on shore, so when it’s time to haul out, walruses like to play follow the leader. In other words, once one Walrus hauls out onto the beach, the gathering continues to grow and grow.

“Until one brave soul is willing to haul, they’re all looking around and wondering, ‘Hey, did Bertha just haul out?’ Wherever Bertha or that brave soul picks, within hours, they’ll all begin to haul out,” Polasek said. “They just want to be with other walruses.”

While the massive Walrus gathering makes for an epic sight, the event is concerning given that there natural behavior is being altered to such a degree. So can Walruses adapt to this?

Polasek says that in general, haul-outs can be harmful to walrus populations. The International Union for Conservation of Nature (IUCN), which tracks the status of species worldwide, says there is not enough information about walrus population trends to say whether the species is in decline. However, according to the IUCN website “climate change is expected to have negative consequences for Walruses, and particularly severe consequences for the Pacific subspecies.” That doesn’t sound very good to me!

One negative effect of large haul outs are that the calves are particularly at risk of disease and from stampedes. “The calves get trampled,” Polasek said. “Upon a disturbance, whether that’s a polar bear or a boat in the distance, walruses tend to rush to the water.”

Polasek added it’s unlikely that the marine mammals can adapt to hauling out in large droves.

The good news is that people are stepping up to mark and taking steps to aid in Walruses conservation.

“The village of Point Lay … has laid out extremely concerted efforts to protect the herd,” Polasek said. “They don’t hunt in the herd. They direct vessel traffic away from the herd. They do everything they can to prevent human disturbances.” Nice one Point Lay, setting an awesome example for other like communities and the world as a whole!