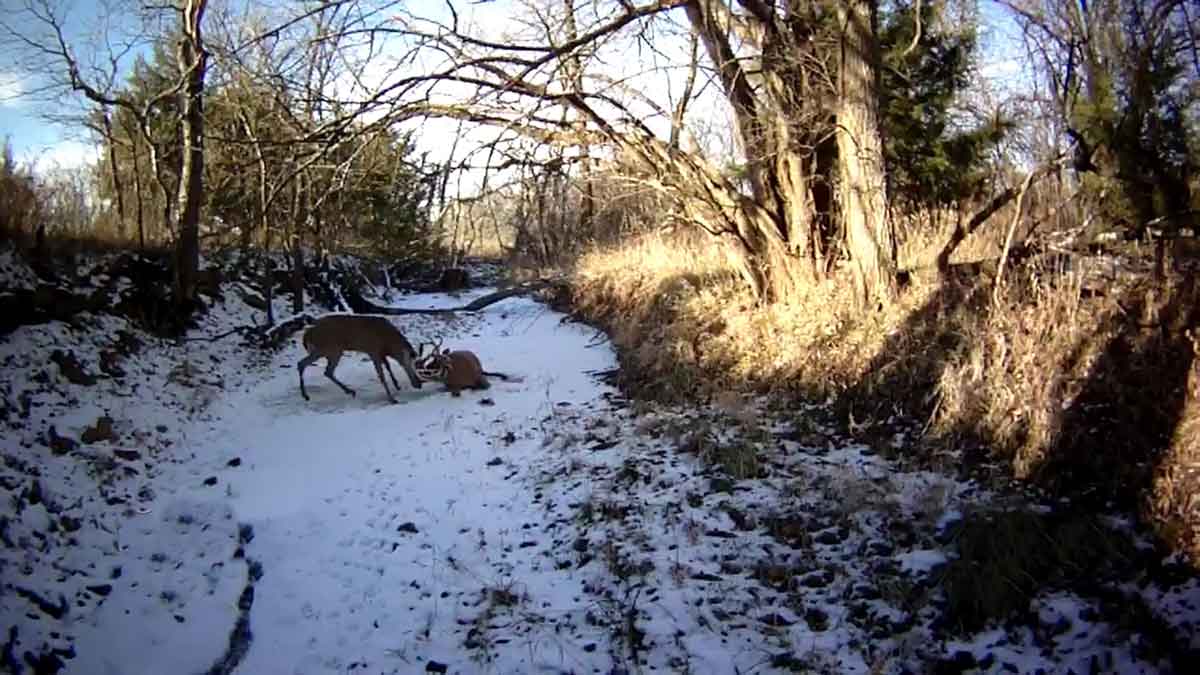 It’s one of the must-see wildlife spectacles—rutting deer during the mating season. It’s a dangerous game for bucks, though, who will sometimes inadvertently get their antlers tangled to the point where they cannot free themselves.

Usually, this doesn’t end well. However, for two tangled deer struggling in the snow in Coffey County, Kansas, luck was on their side. Fortunately for the deer, two ‘Kansas Wildlife, Park, & Tourism’ game wardens happened to be passing through the area at the right time.

On December 20, Lynn Koch and Brad Hageman came across the rutting bucks. Since they weren’t locked head to head, the deer had the ability to run side by side, which they did to escape the perceived danger. This resulted in their antlers becoming locked closer together and the two collapsed in the snow, exhausted.

The wardens had to be careful—approaching the deer could result in injury to the deer or to themselves. Thinking outside of the box, Koch drew his .45 Glock, aimed, and shot one of the antlers clean off. Lynn Koch’s body camera captured the moment, and ‘Kansas Wildlife, Park, & Tourism’ posted the footage on Facebook (watch the video above.)

In an interview with The Wichita Eagle, Koch said:

We chased them for probably over a mile. They could run faster than we could. We followed them across creeks, through trees and fields. Finally they end up on the ice, and fell long enough for me to make a lucky shot.

Koch and Hageman determined it was the most reasonable and safest course of action:

It doesn’t always end up like that. Last year I [shot the antlers to free two bucks], but one of the deer was already dead.

Other times the wardens have seen both bucks dead from exhaustion or killed and eaten by coyotes. This time, however, the result was a positive one—the game warden Facebook post said: “These guys are free to fight again next autumn. Great shot sir!”