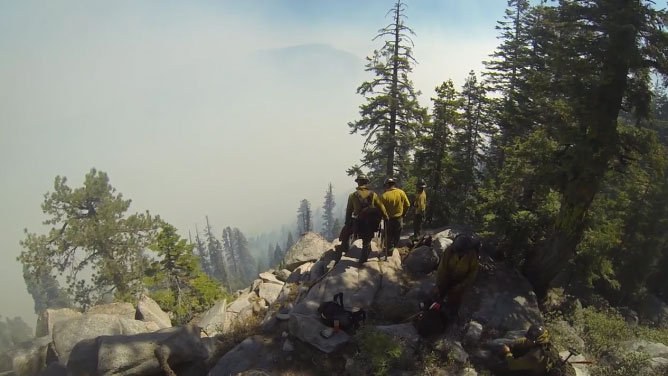 “My dad told me everything he learned about fire was from Apaches. Apaches were well known to be warriors—fierce, the last to surrender to the government. At the same time, fire doesn’t care who you are. It will take you out whenever it wants to. We’re just in the way.”

These words, from a firefighter, open this recent short documentary profiling the Geronimo Hotshots. The Hotshots are a group of elite wildfire firefighters from the San Carlos Apache Reservation in southeastern Arizona, USA. Unemployment in the area is high, and firefighting jobs are one of the few stable opportunities for work. The job means spending most of the year on the road though, battling the most intense wildfires in the United States.

The Geronimo Hotshots are one of seven Native American hotshot crews in the United States who are sponsored by the Bureau of Indian Affairs.

This revealing documentary features GoPro footage from the Geronimo Hotshots’ 2013 fire season, shot by crew member Samson Belvado and put together by the The Atlantic filmaker Sam Price-Waldman.

GrindTV caught up with Waldman to discuss the project.

“There is a long tradition in Apache culture of using wildfire as a natural part of the landscape. One aspect that I was not able to touch on in the video is that the San Carlos Apache Tribe also has a very successful landscape and fuel management system on the reservation, where they use natural wildfires to benefit the land.”

Asked about the selection process for the Hotshot crew, Waldman explained that it’s “very difficult, as they are the most trained and elite group of handcrews. There are many factors that go into the selection…Julius (the superintendent) was very clear that he doesn’t hire people who just want to do the job for the money. He hires people who really care about the work.”

The bare minimum physical requirements are:

“In the offseason, [the crew is] required to do at least an hour of fitness training per day, five days a week.”

Asked about the further community work of the hotshot crew, Waldman said that “when they’re not on assignment, they do a lot of work in the community, from teaching classes, to helping chop firewood.”