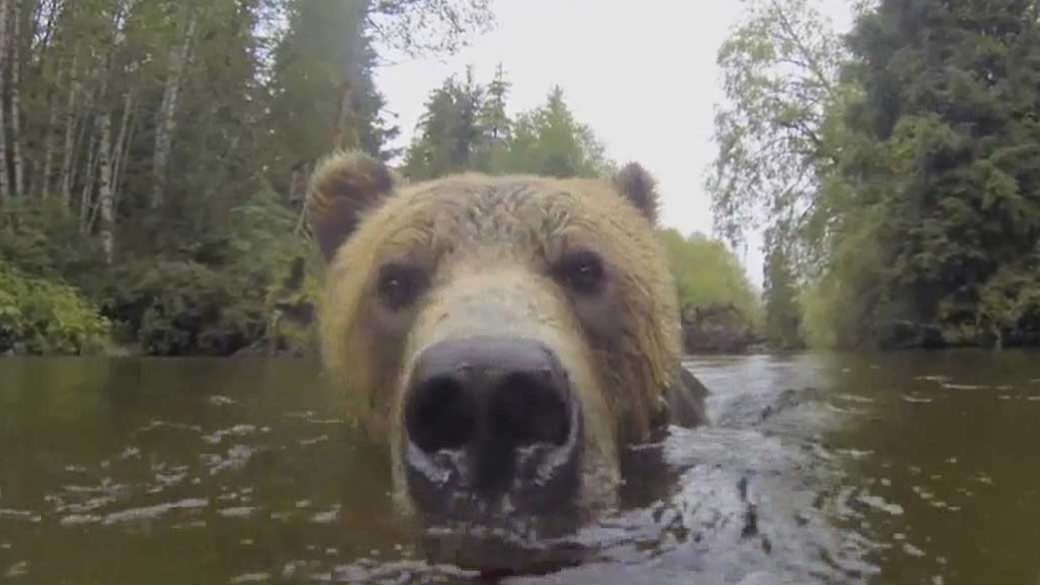 Action cameras offer new ways to capture nature, and—with a bit of ingenious DIY—we can get closer to wildlife, than ever before.

This new video footage from British Columbia, Canada is the perfect example. The fascinating footage offers a rare, extremely close look into the life of a grizzly bear, and was shot using two GoPro cameras—one above and one below the water level—mounted to a homemade raft.

The young grizzly bear seems drawn to the cameras, nosing them playfully in the shallow, clear water of a river in Knight Inlet in southern British Columbia.

The remarkable footage was uploaded by Newsflare member kitchinsink, who wrote:

The idea was to film bears diving for fish in two-meter deep pools. If I was in the pool they wouldn’t come and dive, so I needed a camera that would float inconspicuously!

The wildlife filmmaker had hoped to film more natural bear behaviour, such as fishing, but the young grizzly was too excited by the strange object.

Dave Garshelis, a biology professor at the University of Minnesota and the leader of the state’s bear project told National Geographic:

It’s clear the bear was curious about the cameras. Bears are very curious, especially young bears like this one. Cameras can have a distinct smell and they look obvious in the water. Bears often destroy cameras out of curiosity, which is why we put metal cages around the ones we use to study them.

Garshelis says it’s too hard to tell the sex of the bear from the video, but the filmmaker says it was a female, based on longer observation of the animal.

According to Garshelis, who mainly studies black bears in the Midwest and several species of bears in Asia, Grizzly bears have a robust population and are doing very well in British Columbia. Given WWF’s recent study, concluding that two-thirds of the world’s wildlife could be lost by 2020, this is welcome news.

It’s not all good news for the bear population in the region, though. Bears often appear in the news during the province’s limited hunting season, when animal advocates and hunting advocates square off.

On this issue, Garshelis says:

The hunt is more of a moral, ethical question; it’s not that the population has been impacted.

While grizzly bear tourism is booming in British Columbia, with numerous lodges and tours operating up and down the coast, tourists need to respect the bears and keep their distance. After all, it wasn’t that long ago, that the US Forest Service had to issue a warning to tourists, explaining that they should not take selfies with wild bears!

By using ingenious contraptions, like the dual GoPro raft used to capture this video, we can get closer to nature without disturbing it.

I don’t think [this video] could be construed as harassment in any way. It’s not like it was trying to catch a fish and then was disturbed. It was just curious about the cameras.