It is highly unlikely that you will ever be attacked by a shark. So unlikely, in fact, that the odds of dying from a shark attack are approximately one in 3,748,067. To put that into context, you are more than 10 times likelier to die from fireworks and around 50 times likelier to die from a lightning strike. On the other hand, humans kill around 100 million sharks every year, so sharks have far more reason to fear us than we do to fear them.

In addition, sharks’ position as top predators is crucial to the oceanic ecosystem, and the number of threatened, vulnerable, and endangered sharks is a great cause for concern. A recent fisheries report from the International Union for the Conservation of Nature has revealed that more than 25 percent of the 1,000-plus species of sharks and rays are currently threatened by extinction, with 25 species on the brink of extinction and populations at critical levels. The practice of shark finning, which usually involves harvesting only the fins of sharks, is partially to blame. With humanity’s insatiable appetite for seafood, it’s important to know that many scientists have predicted the complete collapse of entire marine populations in a future in which sharks are overfished to the point of extinction.

I’m not trying to incite fear of sharks. It is important to recognize that sharks are not evil, they are not out to get you, and we have more reasons to appreciate them than we do to fear them from an environmental and ethical standpoint. For decades, the human fear of sharks has transcended logic and statistics.

In some ways, it’s understandable. Despite the unlikelihood of a shark attack, few scenarios that are more terrifying are imaginable. The ocean is a vast, foreign place that humans are not physically designed to thrive in, so it’s easy to see why the fear of sharks is high on many people’s lists. Let’s look at some of the practical ways to reduce your already-minute chance of ending up as a meal for a shark during your next visit to the beach. It’s usually a combination of several factors that leads to a higher-than-normal risk of shark attack rather than any one item on the list below.

Lifeguards, with their raised vantage points and complete view of the beach, are your best friends if you are paranoid about sharks. They can spot any unusual activity and clear the water of swimmers if anything seems amiss. Swimming on beaches without lifeguards removes that safety net.

The flash from metallic jewellery catching the sun can look like the sparkling scales of a baitfish to predatory sharks, triggering their desire to come in for a closer look. In addition, sharks see contrast very well, particularly in murky water. One key to avoiding their attention could be avoiding bright or high-contrast swimwear in the water; picking dull-coloured outfits or wetsuits is sensible. 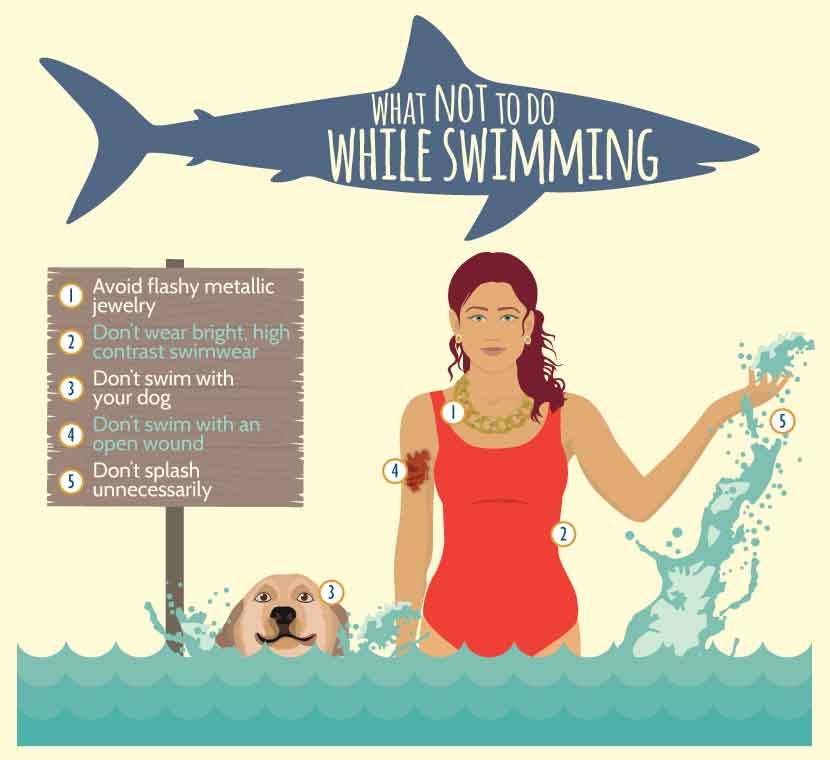 While the scent of human blood does not normally interest sharks, they undoubtedly have powerful senses of smell and can likely detect the scent of an open wound in the water. It’s a good idea to stay out of the water if you have a fresh cut, particularly if any other factors are present that could attract a shark’s attention. Sharks are primarily attracted to the blood of fish and marine animals, so you should avoid swimming in areas with fish blood in the water. This includes places in which fishers fishing are chumming the water or schools of baitfish are being fed on by other fish.

If you’re a woman worried about swimming while menstruating, you shouldn’t be, according to Dr. Chris Lowe, head of the California State University Shark Lab. “The amount of blood that is produced during menstruation is so small that it becomes background with all of the other components that are in the water,” says Lowe. “It would be very difficult for a shark to localize that.”

Those worried that urinating in the ocean will attract sharks can relax. National Geographic debunked this myth by having two divers enter the water alongside some sharks. One diver held a bottle of urine and the other did not. The sharks demonstrated no reactions to the urine.

Don’t Splash or Swim With Dogs

The sound and vibrations of splashing in the water trigger sharks to believe a meal might be nearby. Frantic fish and bustling schools of fish create these same vibrations, so try to avoid splashing and thrashing too much when you are swimming. You might want to avoid bringing your dog into the water with you for any length of time. They not only splash around with enthusiastic joy but also are smaller than humans and just about meal-sized for large sharks, making it possible that they will attract these predators more easily than do humans. However, some scientists dispute this claim, stating that there is no conclusive evidence that dogs attract sharks. 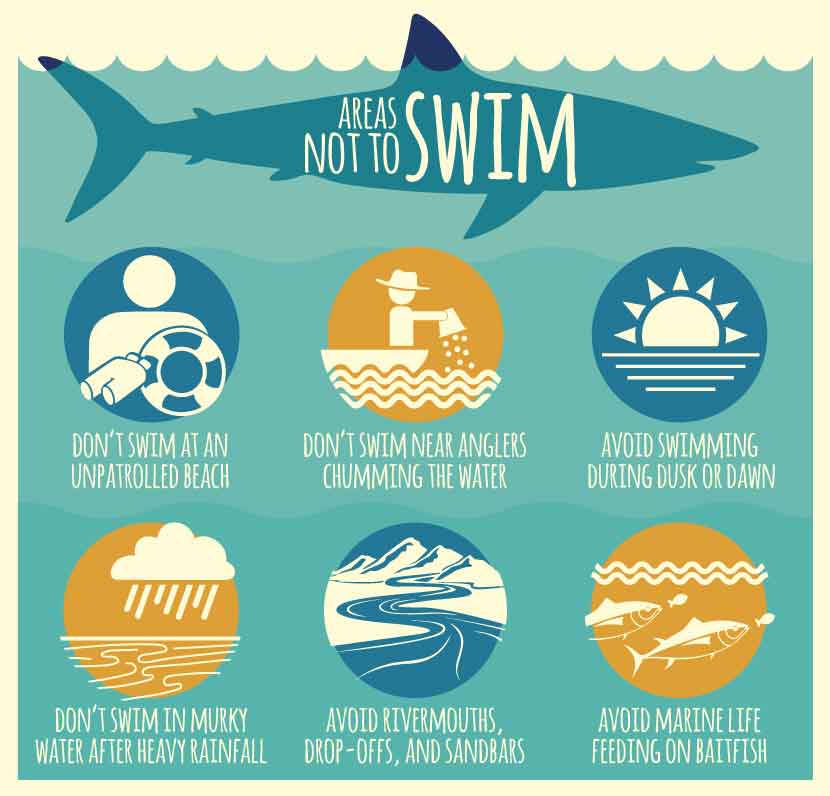 Don’t Swim at Dawn, Dusk, or in Murky Water

Sharks feed more actively in the low light of dawn and dusk. Avoid swimming in murky water, which often occurs after a recent rainfall. Sharks love to hunt in these low-visibility conditions, and you’re more likely to be mistaken for something the shark would actually want to eat when neither of you can see each other very well. Places to avoid include drop-offs, sandbars, river and harbor mouths, and anywhere sewage and waste are deposited into the water.

Be Aware of Your Surroundings

One myth says that when dolphins are around, sharks won’t be. This is untrue. Sharks and dolphins often feed on the same baitfish, so it’s actually more likely that when you see one, you will encounter the other. Dolphins can even be prey for large sharks. Look for dolphins, schools of baitfish, wheeling and diving seabirds, and any signs of panic from these creatures. Marine creatures are more aware of underwater warning signs than you can ever be.

What to Do if it Happens to You

Despite your best efforts and the incomprehensively low odds, a time may come when you encounter a shark while swimming. Despite the horror of this scenario, you can take some steps to walk away from the encounter alive and well. Following a few basic principles will increase your chance of survival.

Despite all your instincts to freak out and try to swim for land, you’re much better off staying perfectly still when you spot a shark. Sharks, like many predators, can sense fear and panic, and they are more likely to attack a fleeing swimmer than to attack someone staying calm and still. Besides, if you think you have even a remote chance of out-swimming the ocean’s primary predator in a race for the shore, think again. The notion of staying calm may seem like a difficult piece of advice to follow in the moment, but it’s your best shot!

Sharks are fish, and like all fish, they can be spooked and scared by aggression and attacks. The first way to signal this intent to fight is to maintain eye contact with a shark and “stare it down.” Sharks are intelligent, and this lets the shark know you won’t be a meal that will go down without a fight. It’s also a good plan because keeping an eye on the shark at all times will allow you to know where it is, and what its intentions are. This advice is most crucial to divers, who are more likely to notice a shark approaching and who are able to keep their eyes open underwater; but it’s good advice for general swimming and shark encounters, too.

Many anecdotal cases tell of divers and surfers fighting off sharks by punching and gouging the fish. One myth says that punching a shark in the nose is the best strategy. You’re actually more likely to lose your hand with this strategy. Aiming for the eyes and the gills is more effective. This small act of aggression is often enough to send the shark looking for an easier meal. Australian surfer Mick Fanning claimed to have attempted to punch a great white that recently approached his board while he was surfing in a tournament in South Africa.

Once the shark has turned away or become disinterested, maintain that same sense of calm and slowly but steadily exit the water as quickly as you can, without undue splashing or panic.

Remember, sharks are disappearing at a rapid rate as humans hunt them actively and deliberately, while humans are attacked by sharks very rarely and usually in cases of mistaken identity. We have a long way to go to salvage their undeserved bad reputations. Respect these creatures for their grace and power and love them for the real, invaluable role they play as the rulers of our ocean ecosystems. Play it safe by following the above rules next time you go swimming, and you won’t have anything to worry about.

Thanks to Hannah Calich, a Master’s of Marine Affairs and Policy student at the University of Miami, for her assistance with this article.

Article by Jack Scrine in association with FIX

Posted in: Environment Tagged: How to?