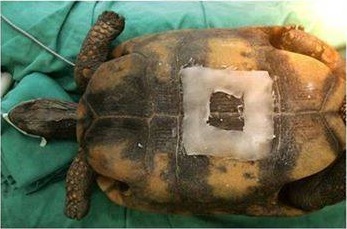 Zookeepers at Chengdu City Zoo, China became concerned about their Turtle, called Dabao, after they noticed how lethargic she had been. They sent her for x-rays and the results were surprising. The x-rays showed Dabao was carrying 14 eggs, that had been caught in her birth canal.

“We suspect she was having a difficult labour because too many eggs were congesting the outlet,” explained the zoo director.

An emergency caesarian section needed to be performed to remove the eggs. Rather than Vets performing the op however, the zoo keepers took Dabao to Chengdu 416, a hospital for humans, where surgeons successfully performed the procedure. It took over two hours to complete and involved  cutting the shell open with a circular saw, removing the eggs and closing the shell with epoxy resin (used to glass surfboards). It’s pretty cool to see surfing tech save a sea-creature’s life so that she too could surf again.
The eggs were immediately buried into the sand until they hatched. Happy Ending!
Email