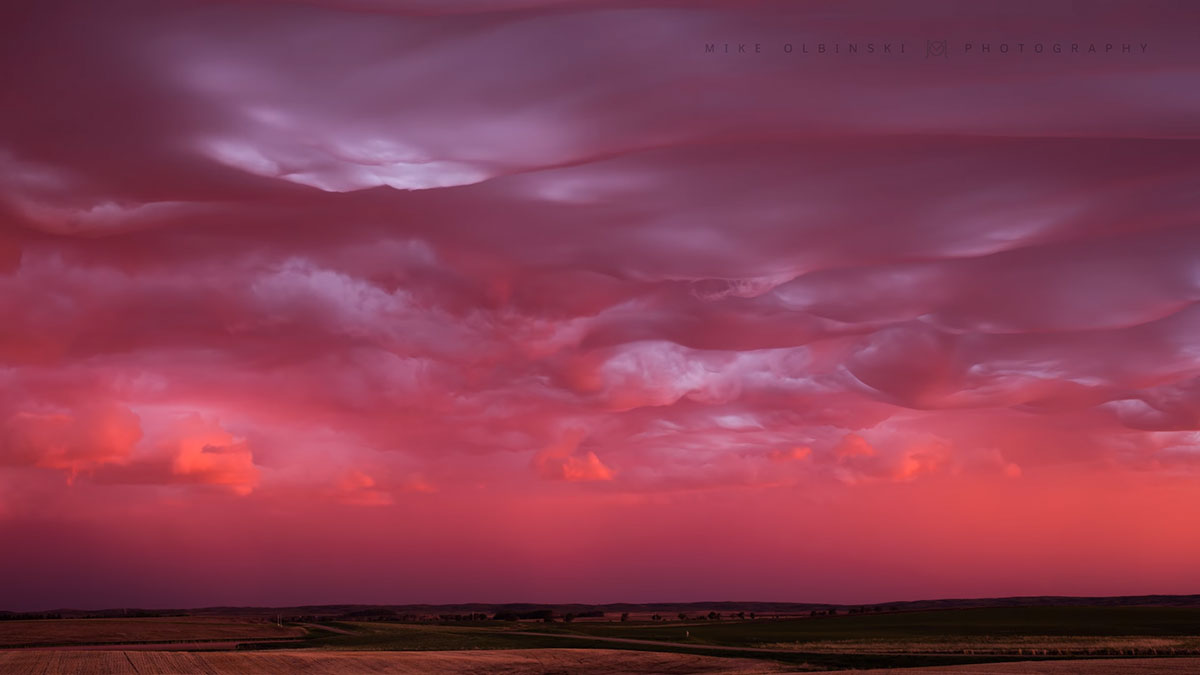 Each spring photographer Mike Olbinski chases storms across the US to collect footage of supercells, lightning and tornadoes. Normally, Olbinski doesn’t release his footage until the end of the season, but this spring he encountered something so rare he couldn’t help but share the footage straight away.

While storm chasing with a group of friends northeast of Bismarck, North Dakota, Olbinski captured footage of a cloud formation known as Undulatus asperatus. Undulatus asperatus clouds are not only rare but are actually the newest named cloud type in existence. In 2008 the Cloud Appreciation Society first proposed a classification for the formation. But it wasn’t until 2015 that the World Meteorological Organisation officially accepted it.

Such clouds tend to be low-lying and are caused by weather fronts that create undulating waves in the atmosphere. Olbinski states:

I’ve seen tons of photos of them, but never anything like what we witnessed last night. We had a storm with hail in front of us and flashing lightning which was fantastic. But then we had this layer of undulatus clouds flowing across our view. Watching them was amazing already, but then the sun slowly appeared from behind some clouds to the west and lit up our storm like nothing we’ve ever seen before.

We were like kids in a candy store. Running around, doing our best to capture it from every possible angle.

The photographer created two different time-lapses of the clouds: “one on the right side with a 50mm and then a wide angle with the 11mm”. He also revealed that the vibrant colours in the video are completely real.

The colours here are real. I only increased the contrast. In fact, I was thinking of actually reducing the saturation because of how intense the colours looked with the contrast added. But that’s how it was and I left it that way. Six of us were there and all our photo and videos look the same.

This was undoubtedly one of the most incredible scenes I’ve witnessed chasing storms for the past 8 years.