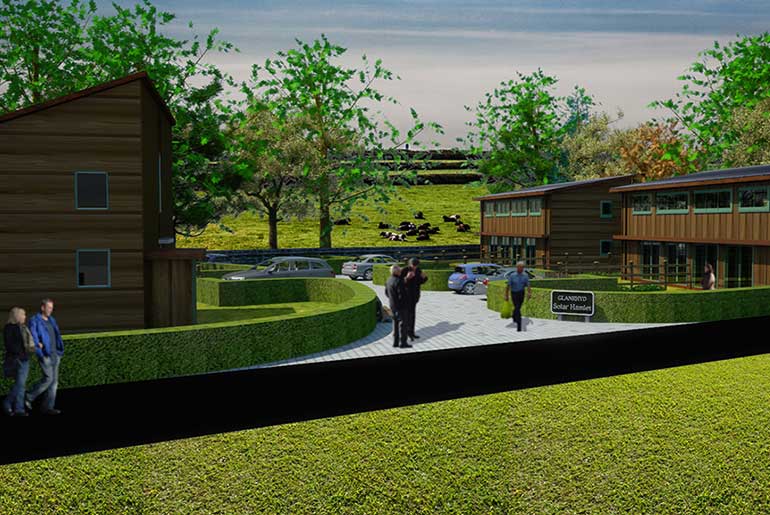 A ‘village’ has been purposely built in Wales that will run entirely off of solar power. It’s the first of its kind in the UK, and seeks to showcase the potentials of renewable energy and the potential for low carbon housing.

Based Pembrokeshire, the ‘village’ called Pentre Solar, set for completion in 2017, comprises of six contemporary houses that will house tenants off of the council’s housing register.

Each home is powered by solar energy, features 11” of insulation and is constructed entirely of timber. The creators expect each house to use only 12% of the energy of a traditional home.

The idea for Pentre Solar came after two local men, (young architect Gareth Dauncy and carpenter Jens Schroeder), dreamt of building a house for just £10,000. Their idea for affordable housing was picked up by Glen Peters, the businessman who commissioned the first solar farm in Wales, and the three formed a partnership.

Despite receiving an initially positive response after the trio revealed their plans for Pentre Solar to the public, the interest started to wane. Peters said:

We expected the phone to ring with expressions of interest from the major providers of social housing but there were no calls.

Peters revealed that mortgage companies were also reluctant to lend to his potential buyers, because the homes were made of timber. Peter resolved that the industry was reluctant to invest in such a new venture and set upon changing their minds.

Peters and the team set up their own eco-factory and gained planning permission for the homes after a year. They began by using local supplies of larch and Douglas fir to create the panels and joinery for the homes. In total, the project was 80% sourced locally.

After the completion of the village, the team are now looking to the future to help implement sustainable affordable housing across the UK. Affordable land and investment are both issues which need to be addressed and overcome, if such projects are to succeed. Peters hopes to tackle the industry head one and dispel its reluctance to support this revolutionary idea. He said:

We’re determined to end the madness that is depriving millions of people from a decent home.