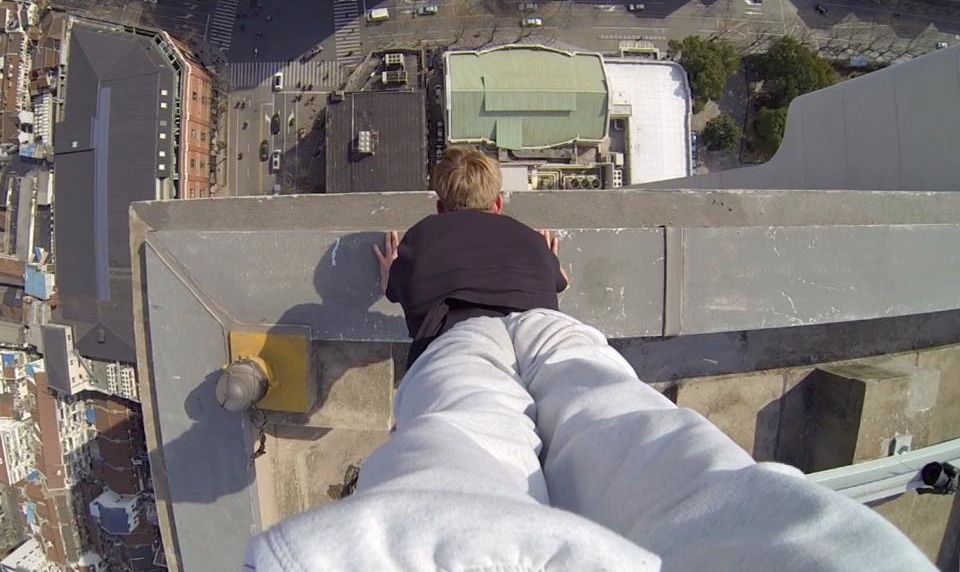 Scott Young is a stuntman, from Britain, who has worked in movies such as ‘Pirates of the Caribbean 4,’ ‘Harry Potter & the Deathly Hallows,’ and ‘The Amazing Spider-Man,’ and is also featured in many commercials. In his latest project, during breaks from filming, he finds the craziest places to do handstands in the locales of the shoot, places such as China, India, and Greece. In the video below from 3runTube, of which Young is a member, he climbed a 40-story building in Shanghai, China, and videotaped himself doing a handstand right on the edge with a camera on his shoe.

The stunt carries enormous risk. On Young’s Facebook page post of this video, a viewer criticized him for equating risk with technical achievement. In response Scott posted “I agree, but the sad truth is you can die from just walking down the street, or even at home. I do what I do to feel alive. I trust and believe in my skills, and if they ever fail me, then I accept that. I’d rather not be scared of life but live and trust in my thoughts.”

Young said he strives to push the boundaries as an athlete and filmmaker, and to entertain and inspire. In an interview with the MailOnline he said about the video below, “We were in India filming and I just thought ‘why not?’ It was scary, but I’m very confident with my body and what I can do.”

“When you do a handstand, you have to focus on the ground in front of you to keep your balance. If it’s only a few feet away that’s fine, but I look right down to the bottom of the building—it’s so far I just have to block it out of my mind…It’s more of a mental thing than anything else. You’ve just got to focus your mind on what you’re doing, not what might happen.”

One particular handstand on a fence atop a parking garage in his hometown of Baskingstoke, in the video below, was a bit more challenging. “This was more of a technical challenge, because the flat top of the fence was only as wide as my thumb, plus, if I’d fallen off the side, I would have probably died and my mum would have killed me because of the scandal it would cause.”