Whether you’re a seasoned mountain biker or have never been on a bike outside of spin class, it’s time to take a closer look at fat-tire bikes: their versatility and soft ride make them the perfect all-around bike or speciality cycle.

Fat-tire bikes are precisely what their name says they are: bikes with really fat tires. If you’ve never seen one, the first viewing is often a little astonishing. They look a lot like a children’s bike that’s been enlarged for adult use. Or like a bike with tires made of black marshmallows. Despite their unorthodox appearance, fat bikes are here to stay. The date of the creation of the first fat-tire bike is both mildly contested and difficult to pin down, but in their current iteration, fat bikes have been available for about a decade and their popularity is soaring.

The fatness of the tire makes these bikes what they are. Most have a tire that’s at least 4 inches wide, which is roughly twice the width of a standard mountain bike tire and nearly four times as wide as a road bike tire. In addition to their increased tire width, fat-tire bikes are designed to operate with much lower tire pressure. Measured in pounds per square inch, most mountain bikes require a tire pressure somewhere between 35 and 70 psi, while most car tires operate best between 30 and 35 psi. With a fat-tire bike, you’re looking at somewhere between 10 and 20 psi, and often even lower. The low tire pressure further increases the surface area of tire and helps keep these bikes aloft on soft surfaces. It’s similar to the difference between walking through snow with just boots, where each step causes you to sink through the soft surface, versus walking on the same snow in snow shoes, which spread the weight over a larger area and remain on the snow’s surface. Because of the tire’s width and low pressure, it’s possible to ride a fat bike on snow, across sand, and even through bogs.

One of the obvious perks of a fat bike is the ability to cycle through new terrain and unique conditions.

Before fat bikes, certain conditions, like snow and sand, where off-limits for cyclists. Winter often meant the end of mountain biking season because it wasn’t feasible to pedal through snow. With a fat bike, winter is simply an extension of the season and can be the time of year to look forward to because new areas become accessible. Trails that are groomed for Nordic skiers are often open to fat bikes. Entire networks of new trails open in the winter, from trails that are groomed for Nordic skiers to new approaches to your favourite single track. Adventurous cyclists have taken fat bikes on glaciers, both snow-covered and bare. You can pedal across the beach. There’s even a new series of fat bike races and events popping up across the country as the sport gains popularity. 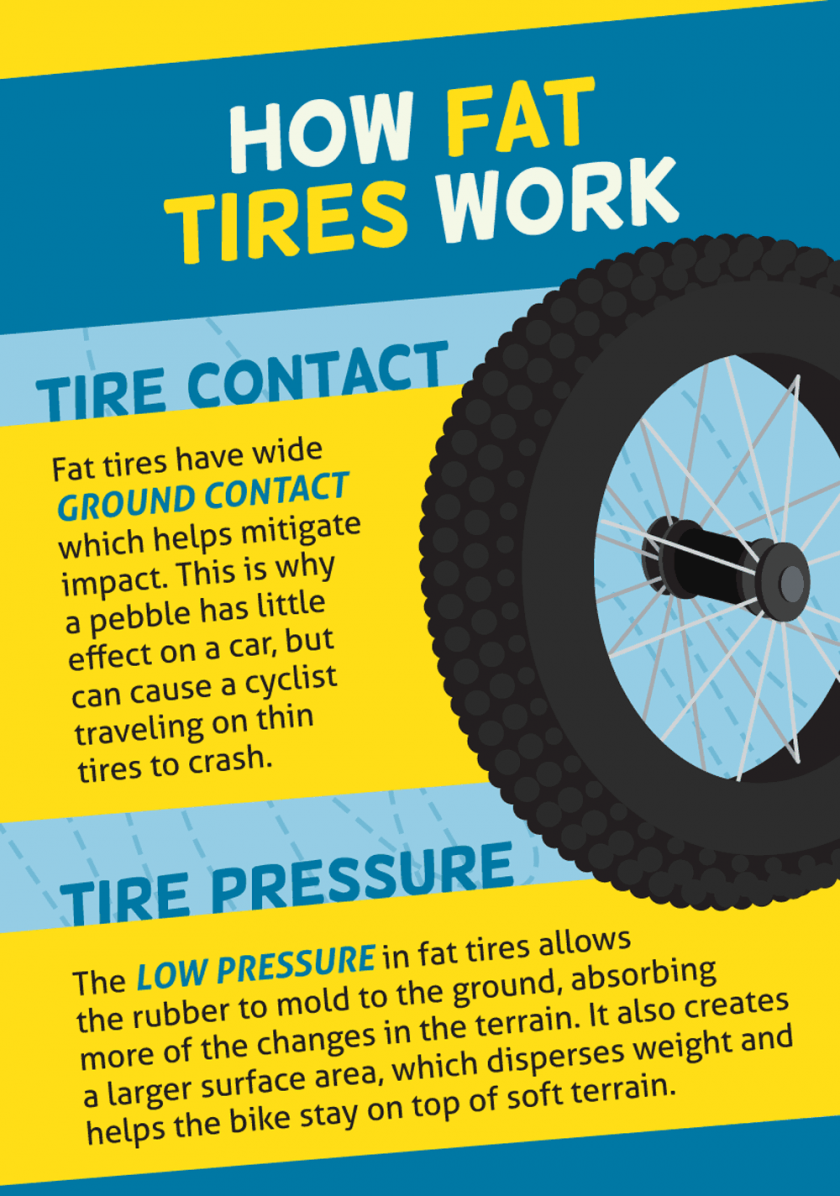 For some, investing in a fat-tire bike means having one bike that will work in all conditions. It may not be reasonable or affordable to have a road bike for city commuting, a full-suspension mountain bike for slick rock, and a fat bike for snow and other loose surfaces. Owning just a fat bike means having a bike that will work in all conditions. Some people actually prefer a fat bike to a road bike for travelling on roads because the wider tires and lower pressure make for a more comfortable, softer ride. Just like they handle holes and rocks on trails, fat bikes perform admirably on potholes and frost heaves.

Fat bikes may be known for floating over tricky surfaces, but don’t be fooled: they’re much heavier than mountain bikes, which are heavier than standard road bikes. The increased weight makes fat bikes harder to pedal on normal terrain, like asphalt and pavement. For some people, this is plus because it means you’re working a little harder while pedalling, thereby increasing the difficulty of your workout.

There are some downsides to buying and owning a fat bike. To begin with, most fat bikes, even the base models, are far more expensive than a basic road or hybrid bike. It’s a big initial investment, which can be a deterrent for someone who’s just looking to test a new way to ride. In regions where fat bikes are popular, there are usually bike shops that will rent fat bikes by the day or half day. This is a great way to preview a bike without having to invest fully.

Another challenge of fat bikes is their weight. Some companies are now selling fat bike frames in lighter material, like carbon fibre, but most beginner or less-expensive models are heavy. The increased weight makes it slightly more challenging to pedal a fat bike at the same speed you would pedal a lighter bike. The combination of the decreased tire pressure and the heavier frames means that fat bikes are generally much slower than other models. If you need a bike that will get you across town quickly, a fat bike probably isn’t your best option.

If you’re never gotten into biking, either mountain or road, or you’re really excited about spin class and are interested in purchasing a free-moving bike, a fat bike may be just the thing you’re looking for. The soft tires and slower speeds make fat bikes the perfect bike for someone who isn’t interested in racing around wooden tracks or manoeuvring hairpin turns on single track. They’re a great cruiser bike because they comfortably handle every type of terrain that a beginner cyclist might find mildly challenging or anxiety-provoking, like rough roads, unexpected manhole covers, and wooden bridges.

No matter where you are with cycling, trying a fat bike will broaden your cycling experience. Whether you use one to explore new terrain, pick one up to stay active in the colder months, or invest in one for comfortable travel around town, there’s a reason for everyone to try out fat bikes.

Posted in: Bike Tagged: Fat Biking| How to?| Mountain Biking