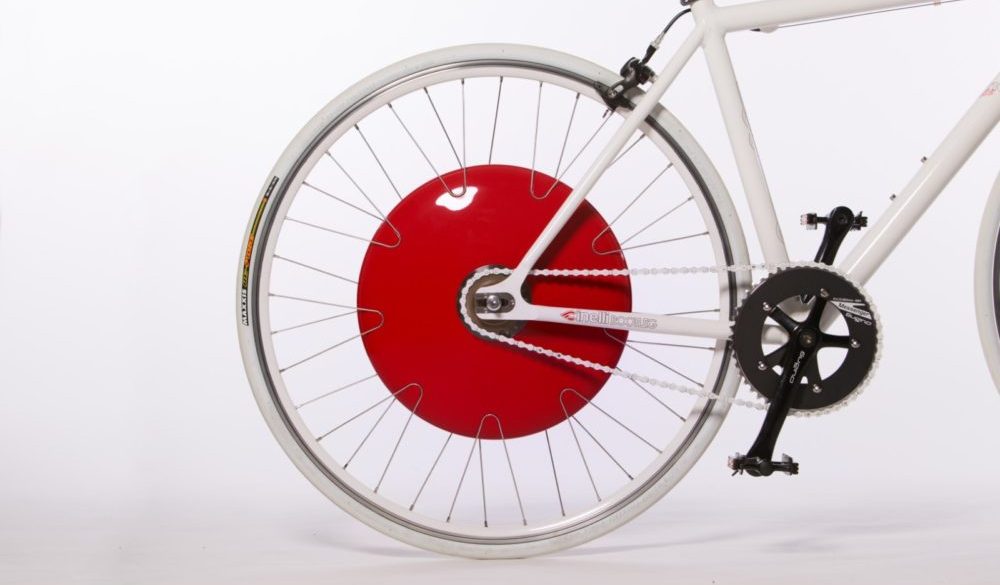 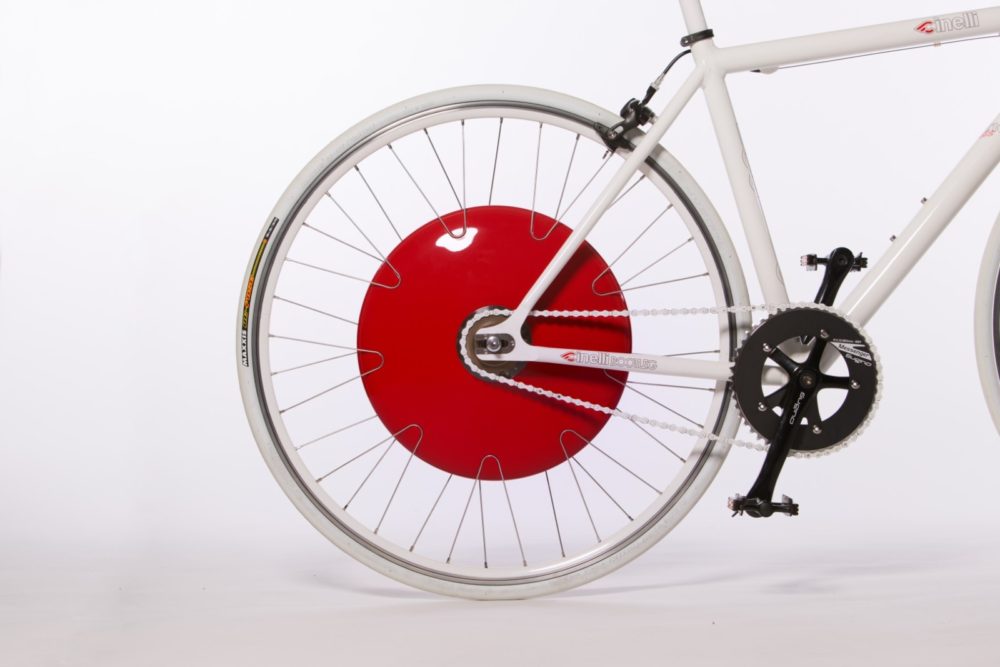 In the past, if you wanted an electric bike then you had to go out and buy one, which is quite an expensive purchase – especially if you already own a bike. While, thanks to a push from a number of established and bespoke bike-companies, the types of electric bike on the market have increased dramatically in the last few years, think the Specialized Turbo, the versatily of these bikes is limited; if you want to ride the bike without power assist then you are going to have to lug around the extra weight of the motor and battery.

Well, two new back-wheels, the Cophenhagen Wheel from Superpedestrian and the Smart Wheel from FlyKly, are now hitting the market and look to change the game completely. By simply replacing the back wheel of a bike with either the Cophenhagen or Smart Wheel, you can turn your Bike into an Electric Hybrid. 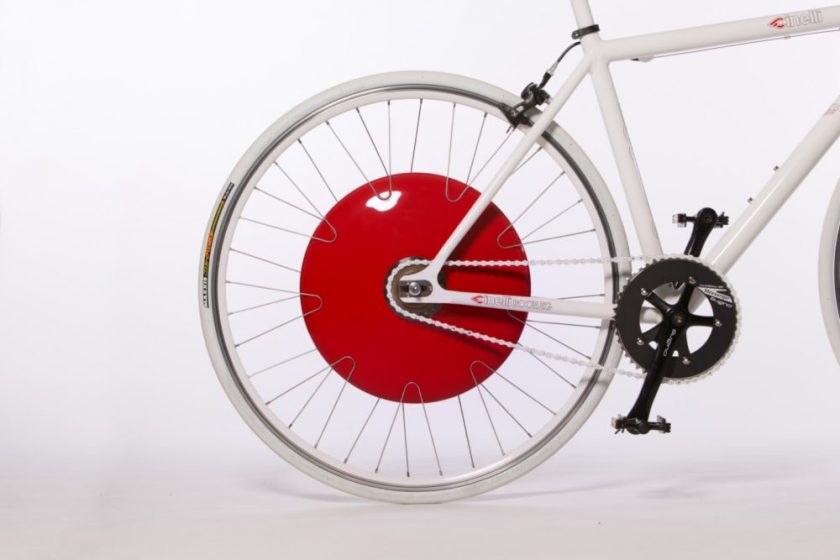 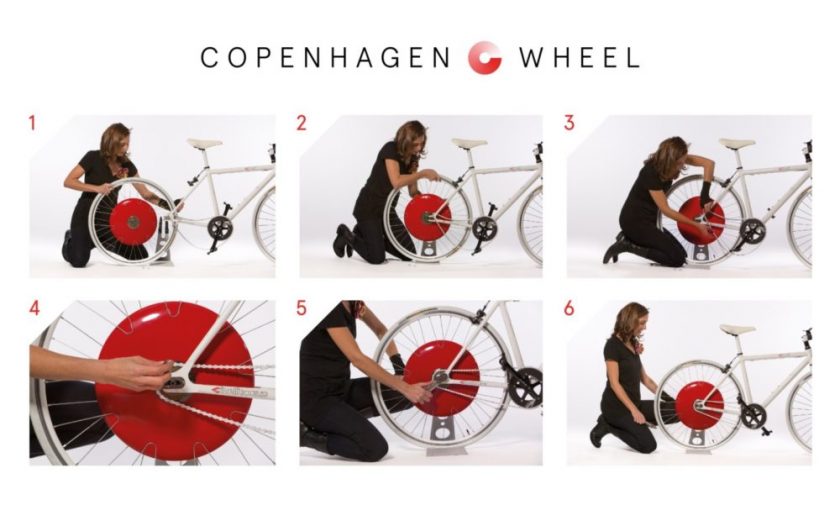 Both wheels work in the similar way and feature near-identical features and specs. The Wheels contain all of the necessary tech, the motor, batteries and wireless sensing units, within a central housing. The power-assist kicks in automatically as soon as the rider starts pedalling, through sensing and control algorithms, and can help them hit 32km/h (20mph) with a range of 48km (30 miles) on a single charge. Both wheels can connect to a smartphone (currently iOS and android) via an app. FlyKly’s Smart Wheel can also contact to a pebble smart watch. Through the apps, the rider can set the amount of pedal-assist they want, lock or unlock the wheel and change (internal) gears. The owner can also use the app to track the wheel (and the bike it’s attached to) though the app, helping to combat theft.

To help increase the range of power-assist, the wheels both take advantage of regenerative braking technology to recharge the batteries during a ride. When riding downhill or braking the energy dissipated is converted to electrical energy and stored in the batteries to be used whenever the rider needs a boost. The Coppenhagen Wheel has a removable 48Volt Lithium Ion battery, while the Smart Wheel is equipped with a smaller 36V battery. However the charge time of the Smart Wheel is 1 hour less at 2-3 hours and the top speed and range are identical to it’s competitor. According to the both companies, the batteries are good for 1000 cycles/charges.

The Coppenhagen Wheel’s sensing units are also used to capture telemetry and other data. This data includes the riders effort level and information about the surroundings, including road conditions, carbon monoxide, NOx, noise, ambient temperature and relative humidity. This data can then be accessed through the smartphone app or the web with the aim of planning healthier cycle routes, achieving exercise goals or meeting up with friends on the go. The data can also be shared with friends, or with a wider cycle community so that it can be used by others.

FlyKly’s Smart Wheel comes with some cool add-on tech as well, including a handlebar mounted phone holder that doubles as a recharger and a front ‘smart light’.

The Copenhagen Wheel was developed by engineers at the Massachusetts Institute of Technology (MIT) and licensed to Superpedestrian (the company set up to run the business aspects of the project). The wheel went on sale in December 2013, meaning that Superpedestrian has beaten Flykly in the launch-day race. Superpedestrian also has financial backing from Tumblr founder, David Karp. The company’s co-founder, Assaf Biderman said “Tens of thousands of people have been emailing us wanting to use it in the their daily commute…Though the wheels go on sale today, we’re making it by hand in Cambridge, Massachusetts, and we know that these 1,000 will be made over the next two quarters, but if demand really exceeds this 1,000 then we’ll keep on producing and scale up production.”

FlyKly’s Smart wheel is currently available for preorder and has smashed it’s crowd funding target of $100,000 with 2,358 backers pledging a total of $701,239 so far. FlyKly co-founder Niko Klansek said he hopes the innovation will make utilitarian city cycling accessible to more people.

Both of these wheels are exciting innovations in electric bike technology and are clearly aimed at the urban commuter. The fact that you can retro-fit these wheels to your favourite bike though means that power-assisted cycling may soon appeal to a much wider cycling audience.