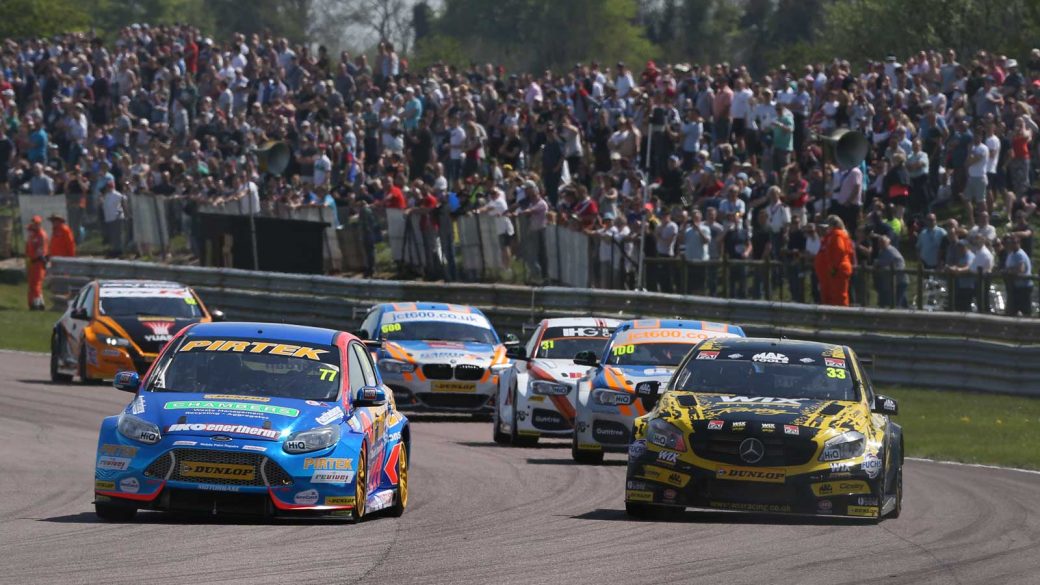 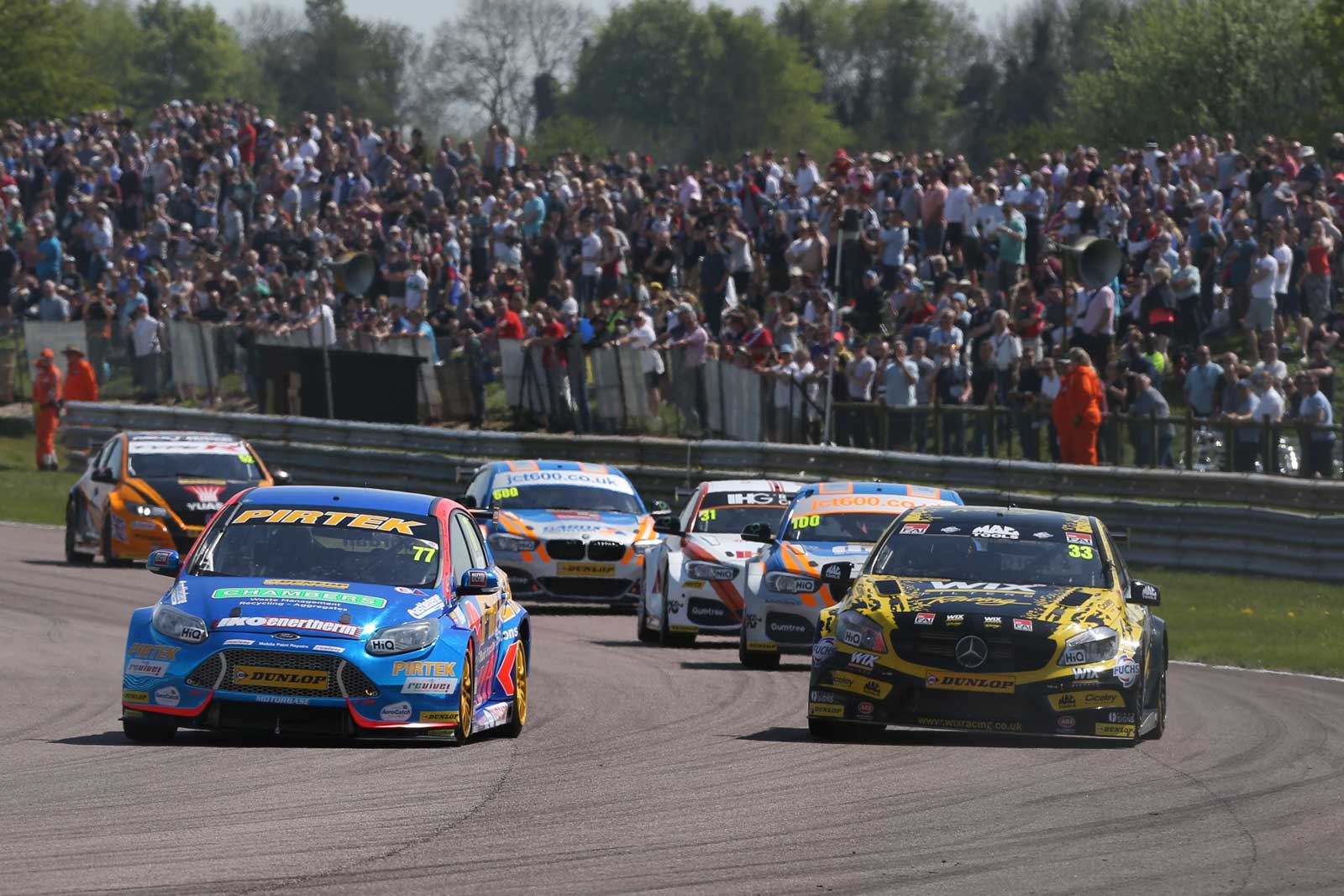 Podiums for Rob Collard and Matt Neal propelled the experienced pairing to the championship summit, with the top eight drivers now covered by just 21 points in the overall standings.

A fast and frenetic triple-header of races was played out in front of a huge crowd in Hampshire – basked in glorious sunshine ­– and the packed banks of spectators were provided with yet more high-class entertainment.

Morgan won a breathtaking opener, having carved his way through the melee to become the first double winner of the 2016 season.

The race began in a frenzied fashion and that theme was maintained throughout the shortened contest, which initially looked to favour pole-sitter Tom Ingram off the line. A slipstreaming contest commenced down to the first chicane, however, which left Ingram alongside both Neal and Aiden Moffat.

Three into one simply wouldn’t go and when the dust settled it was Neal’s Honda out front while Moffat and Ingram were shuffled down the order following slight contact.

MG’s Josh Cook and the Mercedes of Morgan slipped through into second and third respectively, whilst the other MG6 of Ashley Sutton went off on lap two while tussling with Ingram.

Neal led from Cook, Morgan, Moffat and Ingram at the end of the second tour, with positions changing hands at almost every corner. Morgan then blasted by Cook into the final chicane, and a bevy of others further demoted the MG Racing RCIB Insurance driver as he tried to regain his composure.

Morgan hounded Neal’s ballast-laden Honda Civic Type R and produced a stunning move on the leader across the start/finish line at the end of lap four, as a queue of some seven cars jostled for places.

Moffat clawed his way past Neal too, seemingly completing his recovery while potentially rewarding Mercedes with a maiden one-two in the BTCC. It wasn’t to be though, as a puncture forced him onto the grass and back down the order on lap 10. Jackson’s Ford Focus incurred a similar fate at the same time, leaving debris all over the circuit.

By the time the leaders next blasted their way down Brooklands and Woodham Hill, Neal’s Honda had too picked up a puncture. The triple champion attempted to pull into the pit lane but was collected by an unsighted Cook, which resulted in Gordon Shedden, Jeff Smith and Jake Hill, among others, being caught up in the incident.

With cars now littering the track, officials were left with little choice but to cut the race short, and duly the Thruxton marshals waved the red flags to signal the end of the showdown.

With the contest being officially classified at the end of lap 11 it left Morgan with a richly deserved win ahead of the recovering Ingram and Andrew Jordan’s Ford Focus, who had himself made steady progress up the order.

Jordan then joined a list of seven different race winners from the opening eight BTCC races, after the Pirtek Racing driver produced an impressive drive in the second bout of the day.

Morgan made a steady getaway from pole position and the WIX Racing driver coped well with maximum success ballast in the first half of the race. Jordan had nipped by Ingram’s Speedworks Toyota off the line and worse was to come for the latter when he was adjudged to have jumped the start.

A subsequent drive through penalty for Ingram forced him out of the fight as a gaggle of five cars moved into contention. Morgan led from Jordan and the WSR trio of Collard, Jack Goff and Sam Tordoff in close company – the BMWs coming alive in the battle for victory.

The pivotal moment came on lap 11 as Jordan scythed his way past Morgan, with the Mercedes struggling to hang on after a valiant effort at the head of the pack. Morgan was displaced down the order again by Collard’s Team JCT600 with GardX BMW, but he fended off further attacks from the now trio of cars behind him.

Incredibly Halfords Yuasa Racing’s Gordon Shedden had hauled his Honda onto the lead quintet in the closing stages, having started from the back of the grid. While Jordan was busy taking the lead, Shedden caught Goff and Tordoff napping to slip into fourth place. That’s how it stayed until the finish, and Jordan was left celebrating his first victory in nearly two years.

Motorbase Performance then scored its second win of the day as Jackson followed Jordan’s race two success with his own dynamic display in the Thruxton finale.

The victory also marked Jackson’s second of the 2016 campaign as he joined Morgan as the only two drivers to record double wins so far this season.

Off the line, Jackson’s Ford Focus blasted past the Proton of pole-sitter Dan Welch, and despite being kept honest by the chasing pack throughout, he was able to cruise to the chequered flag in relative comfort.

After a series of incidents, Team IHG Rewards Club’s Goff inherited second until Neal’s Honda got by on lap eight. Then, as the second Honda of Shedden attacked Goff for a spot on the podium, closing as the duo swept through Church, the BMW locked up going into the final chicane and the pair made contact. Shedden retired with damage after limping over the start/finish line while Goff could only manage an eventual 18th place.

The final spot on the rostrum went to Morgan – making it a hat-trick on the day – as he crossed the line just 0.198s ahead of MG pair Cook and Sutton.

Collard claimed sixth and with it the joint lead of the championship alongside Neal. The top eight drivers are covered by just 21 points – with Morgan, Jackson, Shedden, Goff, Tordoff and Jordan all in contention.

West Surrey Racing now leads the Manufacturers’/Constructors’ Championship from Honda, although the latter has maintained its lead of the HiQ Teams’ standings.

MG’s Sutton heads the Jack Sears Trophy although Michael Epps has closed the gap after a hugely impressive day in his Toyota Avensis.

The Dunlop MSA British Touring Car Championship now rolls on to Oulton Park in Cheshire on 4/5 June for Rounds 10, 11 and 12 of the series.

Adam Morgan said: “It was incredible. It didn’t feel like I was trying too hard from the beginning and I was taking time out of people all the way round. It’s been a mega job by everyone in the team. The car was hooked up and I couldn’t have asked for much more. Every time I got the chance, I was asking my team what the gap was and just trying to conserve as much as I could. I saw that Mat (Jackson) held everyone up for me and then later on there were a couple of incidents, so it was a tricky one and a fantastic win. I love Thruxton – it just seems to work.”

Andrew Jordan said: “I got a bit emotional initially because it’s such a big relief. A lot of the media like to remind you when you last won a race. I knew it’d come when the time was right and when everything fell into place. Adam (Morgan) drove a really good race but I could see where he was struggling off the chicane. He gave me good room and saw I had enough on him so it was fair enough. It was a great race with great guys. I love racing with people like this. There’s just a great respect between us.”

Mat Jackson said: “It had been tough earlier on. Race one was a bit of a nightmare. To come through and pick up eighth in race two, and get the reverse grid massively helped. We’ve ended the day well but it’d been a difficult day. It was very warm and it’s hard on tyres at Thruxton. The downside is we go to Oulton with ballast, but success comes at a price and that’s the price you pay. We’ve certainly got a car that can challenge and I feel very confident and comfortable in it. It’s frustrating that we’ve had two zeroes. Everyone can say the same though. Ifs, buts and maybes don’t win the championship.”

Matt Neal said: “It was certainly good to finish on a high – it makes the journey home a lot more enjoyable! It was a bit of a shame overall because in truth, it was a weekend that had promised so much more and I was staring down the barrel of a gun until the last race! Thruxton has always been a Honda circuit, and we proved that again with the ballast on-board in qualifying. I was surprised just how strong we were carrying so much ballast in race one and the puncture was nobody’s fault. The boys did a stellar job to get us out again for race two in the nick of time – they had to deal with not just one but two cars in a million pieces – and then I was able to open the car up again in race three and was flying at the end. I would never have thought I’d leave here still leading the championship after the first two races, so all’s well that ends well, as they say.”

Rob Collard said: “I’m absolutely delighted to be joint leading the championship after three race weekends – it’s fantastic. It shows that age is only a number with the two oldest boys at the top! It’s experience that’s counting at the moment. I struggled in qualifying yesterday and went to bed thinking ‘my championship’s over’ but it came back to me on race day. We changed the car overnight and dialled the BMW in. We fettled to compensate for the ballast in each race and the car was the best it has been in race three.”

Featured Image: Andrew Jordan and Adam Morgan were among the winners at Thruxton. Photo: BTCC