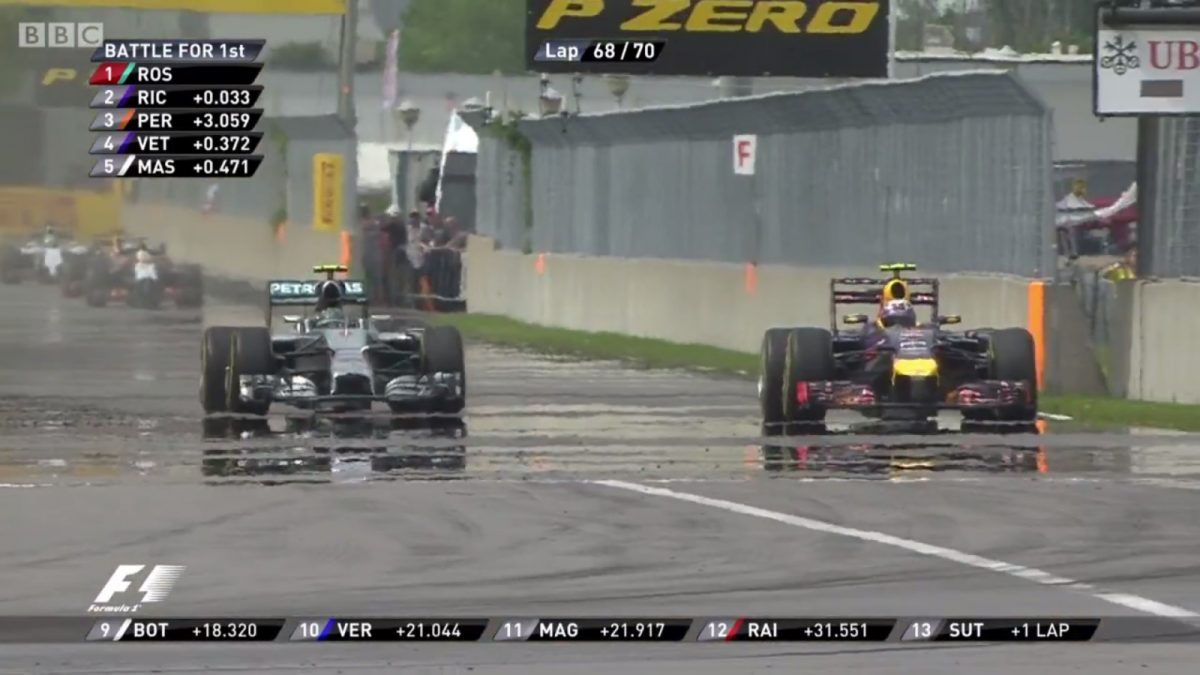 Throughout the first part of the F1 season, we’ve watched race after race of Mercedes dominance, with the two silver arrow drivers (Lewis Hamilton and Nico Rosberg) going head to head, both on and off the track, and the rest of the pack filling in behind.  After Qualifying at the Canadian Grand Prix on Saturday, proceedings looked to continue with Rosberg taking pole position, just 0.079 seconds ahead of his teammate. Over the years, The Circuit Gilles Villeneuve at Montreal has hosted magical racing, with lightning fast straights and punishing braking zones. With a new 10-year F1 contract under it’s belt, the circuit didn’t disappoint providing the most eventful and closely-fought race of the year so far!

The start of the race saw Hamilton launch off the line and attempt to take Rosberg into Turn 1. Rosberg held off though and Hamilton had to open his steering into Turn 2, which allowed Vettel to pass into P2. While the move left Hamilton a position down, he had to take the chance and with the Mercedes car being much quicker than the Red Bull, it wouldn’t be too difficult to retake the position later on the lap. The race suffered an immediate setback however, with huge disappointment for the Marussia team. Max Chilton had his first ever DNF as both Marussia cars came into contact with each other on the first lap, through the transition between Turns 3 and 4. From the camera angles, it looked like Chilton over-steered into his teammate, but in an interview he said that he felt Bianchi didn’t give him enough space going into Turn 4. Either way, both cars suffered substantial damage which will increase the financial pressures of the small team. Marussia needs to look at this as a racing-incident and focus on the positives of the last race in Monaco, where Bianchi finished in the top ten. The collision splattered oil and carbon across the track, which meant a fairly long safety car period followed as marshals removed the two cars and cleared the debris.

After the relaunch on lap 7, Rosberg got away quickly, in front of Vettel (who struggled to keep pace). This hurt Hamilton, who was now looking to retake second place as quickly as possible. Since DRS is not available in the first lap after a safety car, Hamilton was not able to take Vettel until lap 10 (though the pass was simple with the DRS open in the first DRS zone of the lap).

After that, the race settled into a familiar rhythm, with Rosberg narrowly ahead of Hamilton as the two Mercedes cars steadily increased their lead into a race of their own. Rosberg held on through the first pit stops but was quickly closed down by Hamilton. This is where the Canadian GP unsettled the rhythm and things became a lot more interesting. Just as Hamilton was setting up to pass his teammate for the lead both cars suffered a simultaneous loss of hybrid power from the engine. Since the electric engines provide an additional 160bhp (for approximately 33 seconds per lap), this was a huge amount of power to loose and both Mercedes drivers frantically communicated with the team to try and find out what was going on. In the end, the team couldn’t fix the issue meaning that the chasing group finally had a chance to compete with Mercedes.

On the next pit-stop period, Rosberg boxed first but was delayed as the pit crew struggled to secure the front-left wheel-nut. Hamilton’s pit-stop was a lot smoother which allowed him to exit the pit straight ahead of Rosberg, behind Massa. However, on the very next lap Hamilton ran wide at the hairpin, a possible symptom of the brake failure he was about to experience. Along the following straight,  Hamilton was right on his teammate’s tail-light and with DRS open, went for the overtake. Going into the final chicane Hamilton was marginally ahead. At first glance, it looked like there was contact as smoke appeared from Hamilton’s right rear wheel and he missed the chicane completely. As Rosberg emerged next to Champions Wall he quickly closed the gap to Hamilton, who was slowing down; it was clear there was something seriously wrong – a complete brake failure and Hamilton was out.

Massa had to pit, abandoning his one-stop strategy, putting Rosberg back into the lead. Perez, who was on a one-stop strategy, was reaping the rewards of his tire-saving drive and closed the gap to the leader. Perez began to struggle in the closing laps as his brakes began to fade and the Red Bulls were tracking closely behind. Ricciardo began to apply pressure to the Mexican and passed him around the outside into Turn One with four laps to go. The Australian quickly closed on Rosberg and passed him down the long final straight on lap 68 of 70 to take the lead.

The race came to an abrupt end at the start of the final lap when Massa’s Williams came into contact with the back of Perez’s Force India, as he attempted to pass through the first corner. The two cars spun off the track at speed, narrowly missing Vettel’s Red Bull before experiencing heavy impacts with the tyre walls. Both drivers were taken to hospital for precautionary brain scans after sustaining impacts of 27G, but have thankfully been discharged. The medical tests were required because the incident set off the medical alarm in their cars, which is triggered by impacts of about 18G or more. Since the race, stewards have decided that Perez caused the collision by illegally changing his line on the approach to the first corner. He has been given a five-place grid penalty at the next race in Austria. Both Massa and Perez were on excellent drives and looked like registering brilliant results for their teams, so while the collision is a massive disappointment a lot of positives can be taken from that.

The race finished under the safety car meaning that Daniel Ricciardo took his first F1 win, with Rosberg in second and Vettel in third. Vettel gave his teammate a big congratulations as they stepped out of their cars; that’s great to see at it must be unsettling for him not to be the one taking first place.

“I’m still in shock. This is ridiculous,” said Ricciardo. “The race really came to life the last 15, 20 laps. We saw Hamilton had a problem and then Rosberg was slow on the straights. I was struggling to get past Perez and we finally got a run out of the last chicane and got him into Turn One and then a couple of laps to go I found myself in the right spot to get the DRS. Amazing.”

Red Bull team principal Christian Horner said: “Amazing, the boy’s driven brilliantly all year. The move of the race was around the outside of Perez a few laps from the end.”

With all the drama in the closing stage of the race, it was not immediately clear how Button, who was eighth with six laps to go, passed both Hulkenberg and Alonso for fourth (an awesome result for Mclaren). Williams’ Valtteri Bottas took seventh, ahead of the Toro Rosso of Jean-Eric Vergne, McLaren’s Kevin Magnussen and Ferrari’s Kimi Raikkonen.

The brake failure for Hamilton meant his second DNF of the season, which puts him 22 points behind teammate Nico Rosberg (with his second place finish). “I’m two DNFs down; that’s almost 50 points I’ve lost. I’m going to have to recover them somewhere else,” he said. “A run of wins is what I’m going to have to do. But we’ve got lots of races ahead of us so let’s hope there is more good fortune to come in the future.”

While it’s great to see a non-mercedes driver take the win (for the competitiveness of the sport), it’s important to remember it took a loss of hybrid power for the other teams to compete. Rosberg finished second with a 160bhp defictit in places and that’s crazy. All of the team principles will know that there is still a way to go before their teams can compete with Mercedes under normal circumstances!