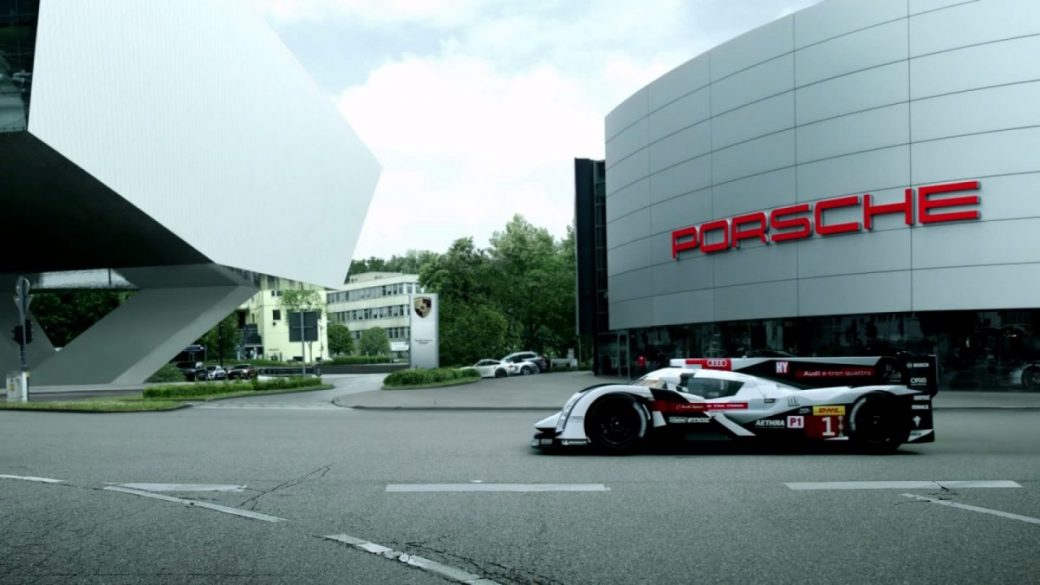 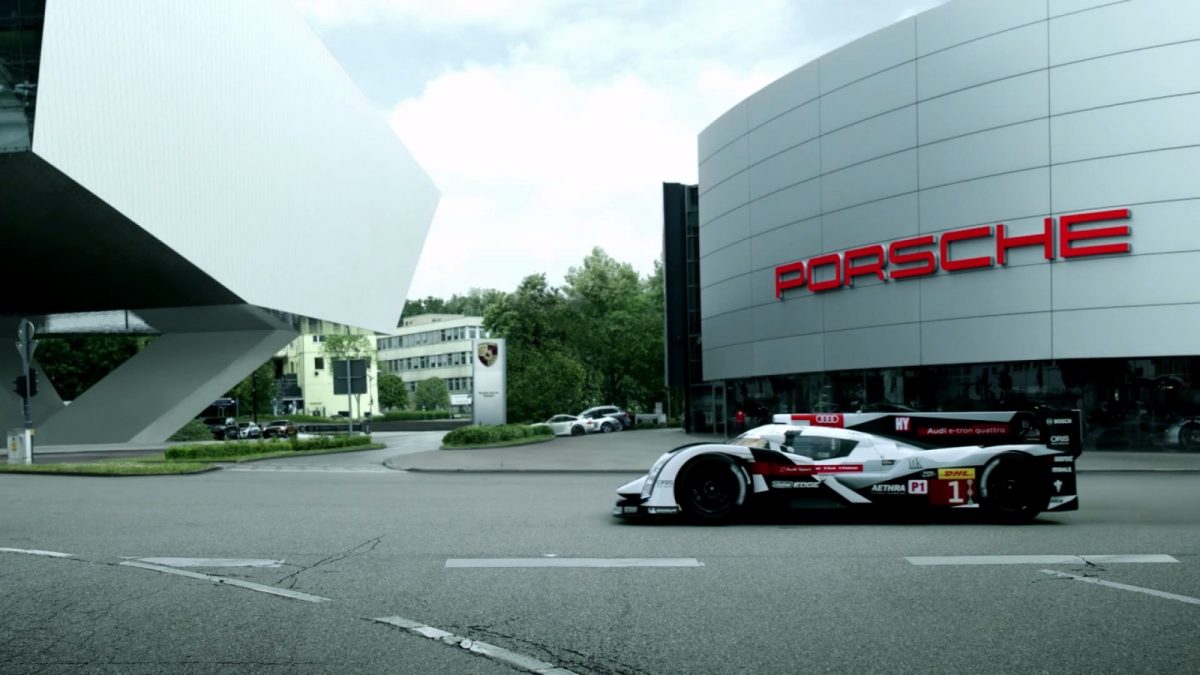 Porsche holds the record of overall wins at Le Mans, having won outright 16 times since 1970. It’s seriously impressive stuff, yet they haven’t won since 1998. In their absence Audi has been the team to beat, having won 12 of the last 15 races. Well Porsche is back and celebrating its return to top level sportscar racing, the team has claimed the front row of the provisional grid for Saturday’s 82nd running of the 24 Hours of Le Mans, in what turned out to be a very shortened first two hours of qualifying.

Le Mans is the third round of the FIA World Endurance Championship and the longest and most famous by far. To welcome Porsche back into the fray, fellow LMP1 (Le Mans Prototype 1) front-runners Audi decided to drive their new R18 e-tron to Porsche’s HQ in Zuffenhausen, Stuttgart, and leave them a little welcome back message written with rubber. Check out the cool video below showing three-time Le Mans champ ‘Dindo’ Capello climbing aboard the R18, and taking it to the streets before painting the road outside Porsche’s HQ black.

Now that Porsche have claimed pole position, I wonder if Audi regret that message now. Here’s a quick overview of what went down at Qualifying. Brendon Hartley set the fastest time of the night qualifying session with a lap of the 14km track in a time of 3:23.179 in the No.20 Porsche 919 Hybrid, 0.77seconds ahead of team mate Neel Jani in the No.14 LMP1 Porsche. Third quickest was No.7 Toyota TS040 Hybrid of Stephane Sarrazin, although the Toyota hybrid car came to a halt on the track due to a loss of engine oil pressure.

What was set to be a two hours of practice turned out to be just 46 minutes in the end, after all the red flag stoppages were taken into account. There were multiple accidents and stoppages spaced throughout the session; the most serious incident saw the session brought to a premature close at 23h30. The decision was made as barrier repairs were needed at the Porsche Curves following heavy contact by Fernando Rees in the No.99 Aston Martin Vantage V8. The Brazilian was taken to the Medical centre for precautionary checks, but was released soon after with no injuries.

During the afternoon practice session, which took place before qualifying in the evening, Loïc Duval had a serious accident in the No.1 Audi. Luckily Duval had suffered no more than grazed skin. However, it has been announced that – following a request to the Stewards of the Meeting, Marc Gené will replace Duval in the No.1 R18 e-tron quattro which was rebuilt overnight. The Spaniard, who was due to have raced in the No.38 JOTA Sport LMP2 entry, is in turn being replaced in the British car by Oliver Turvey who will tomorrow present himself and all his racing equipment to the Secretary of the Meeting and receive a special briefing from the Race Director.

The 24 hour race begins June 14th. Stay posted to ADAPT sports for a roundup of the Race.