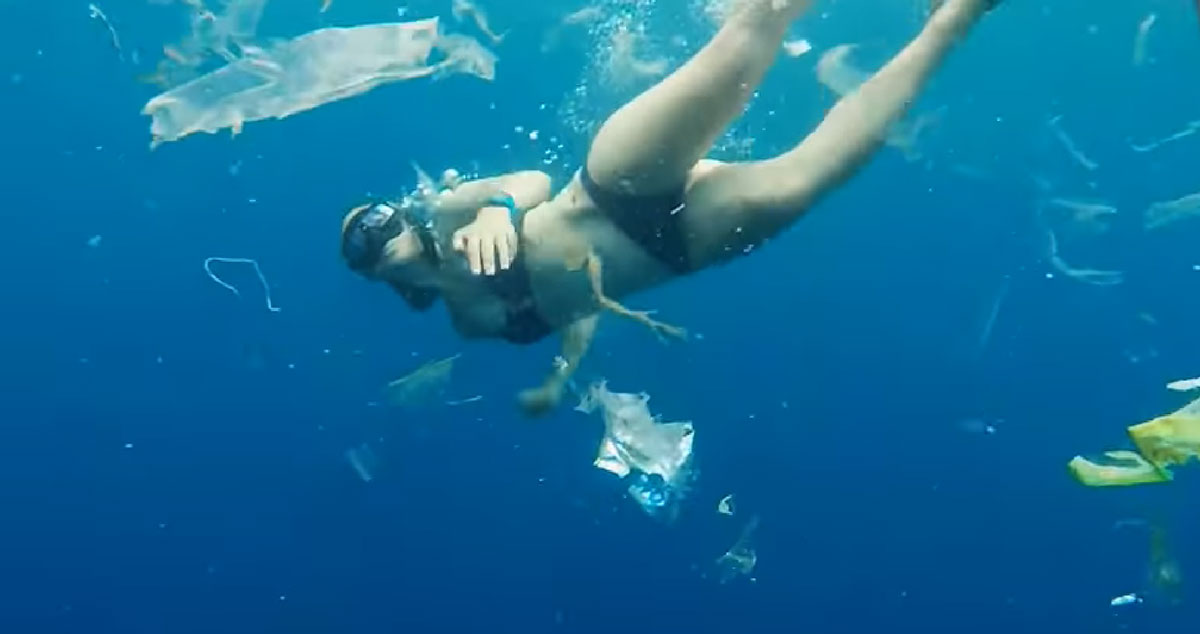 Ocean plastic pollution is one of the biggest global environmental threats of our age. This man-made material makes up about 40% of the world’s ocean surfaces, with eight million tonnes of this stuff ending up in the sea every year. Earlier this year, a whale was found off the coast of Norway with 30 plastic bags in its stomach.

Diving in three tonnes of rubbish

But one of the issues is that because some people can’t see it, they don’t acknowledge the extent of the problem. A video from professional freediver Julia Wheeler is about to change that.

Recently, Wheeler and fellow diver Trista Fontana were training off the coast of Bali, Indonesia. While diving, Fontana spotted a mass of litter travelling towards them. Wheeler dived down to investigate. She re-surfaced moments later with a plastic bag covering her head and realised the area was swamped with up to three tonnes of rubbish. Human waste products were everyone: entire plastic bags, bottles, wrappers and containers.

Determined to raise awareness of the problem, Wheeler grabbed her camera and recorded the sequence. She now wants the world to recognise their responsibilities ‘before it’s too late’.

I was swimming through all of this human waste, my body was covered in rubbish, I had a plastic bag over my head and I just felt really dirty. I wanted to get out, I felt very claustrophobic and it was scary.

Ocean pollution is a major threat to wildlife as animals often consume the toxic waste and can get trapped and suffocate. One in three marine mammals have been found entangled in marine litter and over 90% of all seabirds have plastic pieces in their stomachs. Wheeler saw this first hand.

Going through rubbish was disgusting, I even saw fish trying to eat bags and turtles trying to swim through it all.

After seeing the extent of the pollution first hand, she issued a very stark warning:

We are reaching a stage of irreparable damage to the environment because of single-use plastic… Say goodbye to pristine beaches and look forward to a plastic paradise because here’s the proof—that’s where we are headed unless we all make a small change.

But the ambassador for ‘Take 3 For The Sea’ maintains that it’s easy to reduce our impact on the environment.

The time to make a change is today and everyone can play a part with very little effort. Each one of us can make a huge impact by even the simplest things like use reusable bottles, taking your own coffee cups and saying no to plastics straws.

In the summer Surfers Against Sewage also launched a petition against ocean pollution. Find out more here.