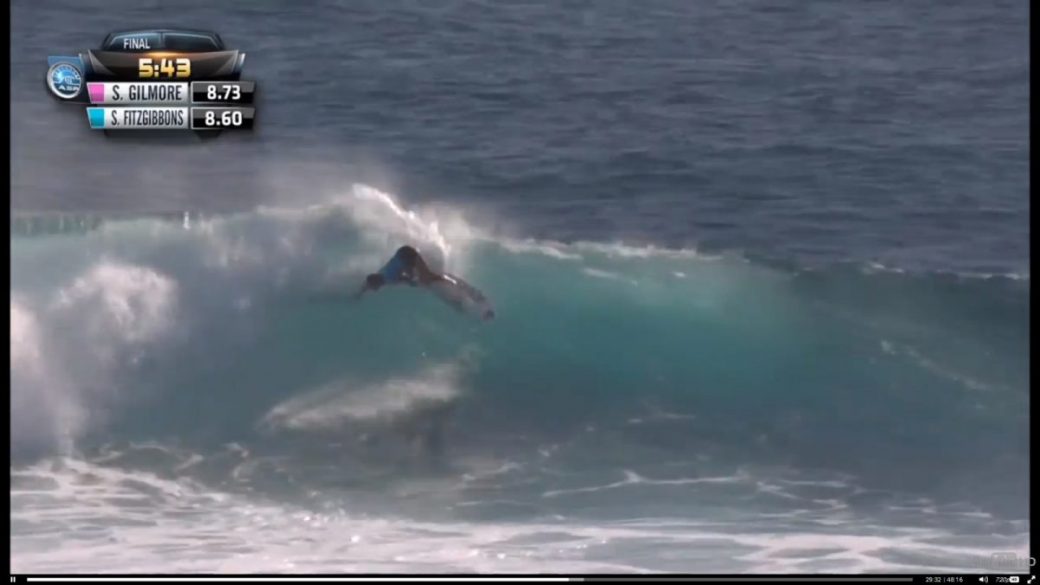 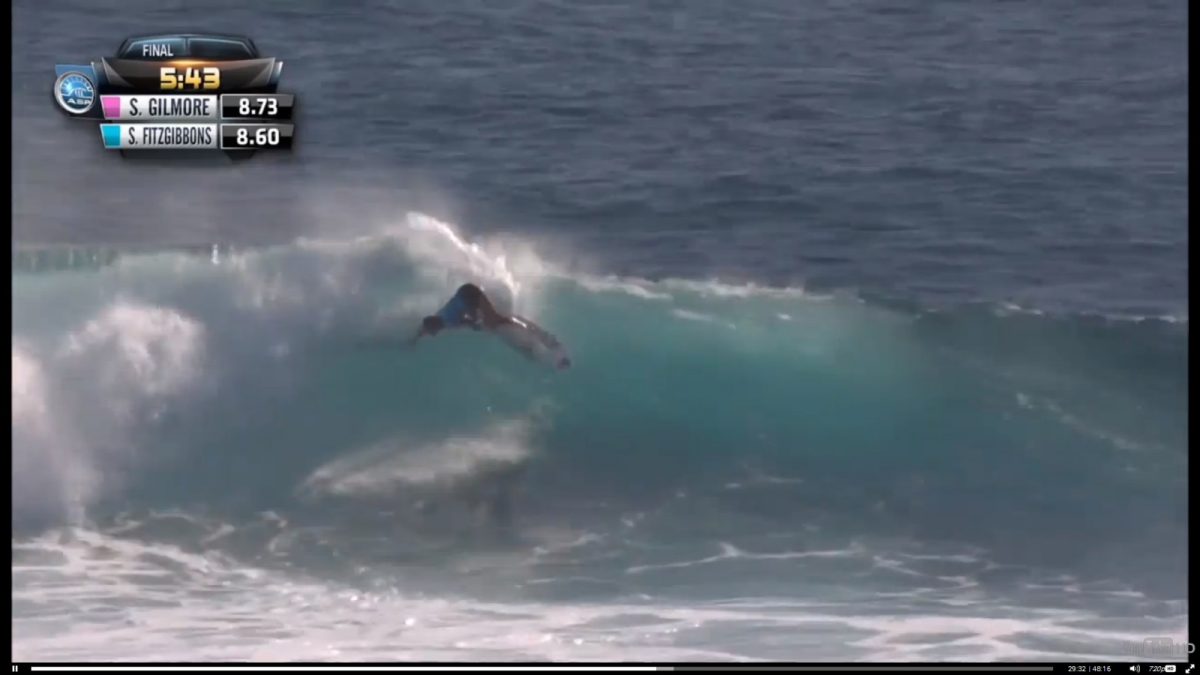 The anticipated Swell, set to arrive at Cloudbreak on Day 2 of the Fiji Women’s Pro, stuck to the schedule allowing for some exceptional free-surf practice for most of the men’s world tour, in preparation for Sunday’s comp. start. The organisers of the Women’s event however, for some reason, decided to run the competition at Restaurants; while this location produces awesome sets it just wasn’t turning on for the event. The conditions were disappointing but by the end of the day they were part way through Round 4.

Resuming the round on the Final day (this time at Cloudbreak), it was even more important the competitors came out of the blocks charging for a place in the Finals. The first heat was a rare elimination matchup featuring world No. 2 Sally Fitzgibbons and World No. 3 Tyler Wright.

Wright took the first plunge with five minutes, getting a feel for the throaty lefthander and honed her technique from there, posting two midrange scores in the first half of the heat. Fitzgibbons struggled to find a clean face to post scores, however and fell behind on points. Tyler unleashed her barrel game with a quick tube ride in the seven-point range. But Fitzgibbons perfected her cutbacks and posted an excellent 8.40 to overtake the lead with five minutes left. Both surfers got swallowed up in the massive Cloudbreak barrels before the round ended leaving Fitzgibbons to progress.

After that, the second and final heat of round 4 drifted through the first ten minutes with a lull in the sets. After a restart, conditions improved but it was down to a bit of luck whether you could find the waves to convert into scores (that’s reef breaks for you).

On to the Quarterfinals, matchup number one saw Stephanie Gilmore take on Bianca Buitendag who, it’s worth mentioning, gave her winnings from the Roxy Pro to charity. Buitendag took an early advantage, adding to her scorecard with a solid 8.17 to put Steph Gilmore in a similar position to her last heat (playing catch-up). Gilmore responded with an awesome tube ride (the barrel was a real drainer). Unfortunately she was unable to exit and was left with a small score. Gilmore waited patiently out the back and pounced on a great wave, unloading a series of powerful carves and wraps and was rewarded with an 8.00. With both surfers having one good score in the bag, as time ran out, it all came down to a battle of the backup rides and in the last two minutes both surfers caught waves. Buitendag registered a 5.33 but Gilmore got the better of the exchange, scoring a 7.50 and and earning a ticket into the Semifinals.

Quarterfinal round 3 was between Sally Fitzgibbons and Laura Enever. Fitzgibbons started the heat with style, netting a pair of seven-point rides on her first two waves. Conversely, Enever broke her board as she free fell from the lip searching for a tube. Enever was unlucky for the remainder of the heat and was unable to find any waves of consequence, allowing Fitzgibbons to advance into the Semifinals. The other 2 Quarterfinal rounds saw Australian Dimity Stoyle and Hawaii’s Malia Manuel advance.

Heat one of the Semis saw a close battle between Stephanie Gilmore and Dimity Stoyle. Stoyle caught her third and final wave as the horn blew but an excellent 8.17 awarded to Gilmore on the previous ride was too much to compete with. The second semi was probably the most exciting heat of the event. Malia Manuel and Sally Fitzgibbons really went for it, I mean – they were charging. The heat had numerous broken boards and heavy wipeouts with both athletes putting it all on the line, but it was Fitzgibbons’ massive tube ride that helped her secure a Finals place. Manuel went home as one of the Fiji Women’s Pro top performers and an equal third place finish.

After two epic Semifinal contests both finalists wasted little time in getting to their feet in the Final, catching small scores to kick off the heat. That’s the thing though, they were small scores and the remainder of the Final followed suit, due largely to the ocean deciding it was time for bed and turning off it’s built in wave-machine. Following the first 10 minutes, neither Gilmore nor Fitzgibbons had logged any notable rides, with Steph holding a slight lead. Over the course of the remaining round, both surfers fought it out in a series of tight exchanges but in the end, Fitzgibbons only needed a 2.73 to win. She quickly found the required wave and converted it into a score of 3.00 to take the lead and secure victory.

The Fiji Women’s Pro was really a competition entirely at the control of the ocean, sometimes the waves were amazing and sometimes it was just chilled in the line-up. The win for Fitzgibbons, marking back-to-back wins, really stirs things up on the leaderboard though. That all means, with Carissa Moore going out in the quarters, what was looking like a one sided title race has now got a lot closer. Keep it locked to ADAPT sports for news of the Men’s comp. due to start on Sunday.