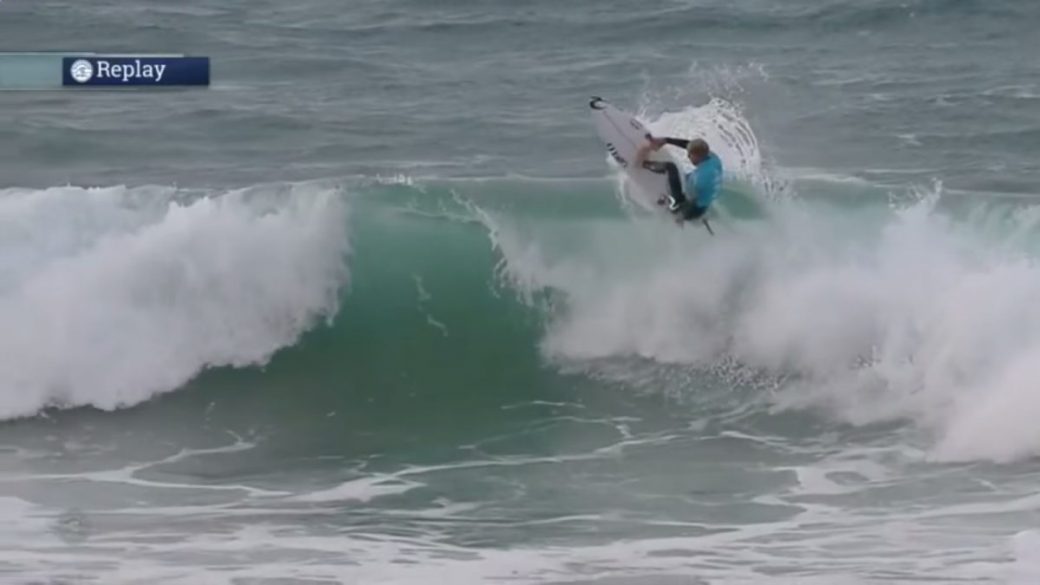 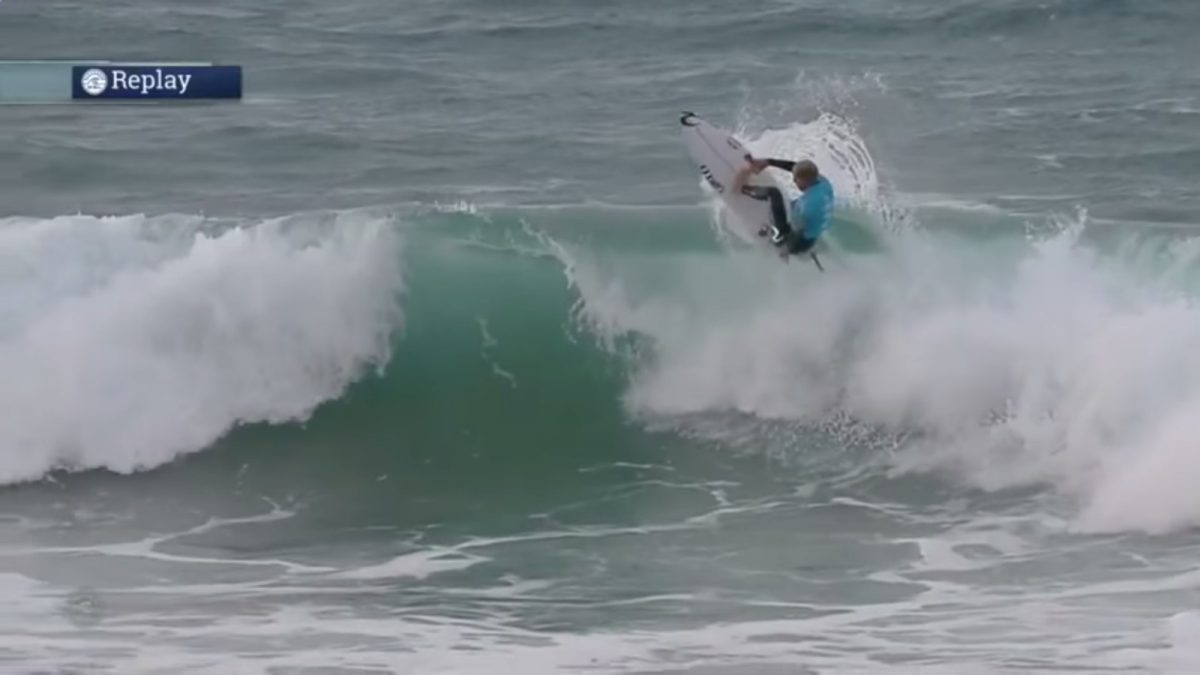 After an agonizingly slow start, the action at Bells got progressively more heated throughout on a day that featured some big upsets, solid performances and a fresh note for the history books.

The first heat of the day saw fellow Brazilians Gabriel Medina and Adriano de Souza go head-to-head, with Medina taking the first shot after a quick drop-in and kick-out.

The next 15 minutes ticked by painfully, with zero action and heavy tension that only grew as the clock counted down. It was De Souza — who had defeated Medina in every one of their matchups to date — who found his mojo toward the end of the heat (“mojo” being a relative term here, with a shifty lineup and onshore wind). Charlie Serrano, Medina’s stepdad and coach, watched nervously as De Souza proceeded to eliminate his son, the reigning World Champ.

“That was a tough heat, there weren’t that many waves and it’s always hard to surf against Adriano,” said Medina. “I wish I could have had some better waves but I’m feeling good. Margaret’s is such a good wave and I think it’s better than here so I’m looking for a good result over there. There’s only be two events so far and today is a good result for me. I hope that continues and I can fight for the Title at the end of the year.”

The waves began to stand up in Quarterfinal 2, an Aussie vs. Aussie battle between Owen Wright and Josh Kerr. Kerrzy drew first blood with a 7.67 putting his younger opponent on the defense. Wright battled back, but never caught up.

Mick Fanning (AUS) was the next surfer to advance — or rather, search and destroy. As the defending event champ with three Bells titles to his name already, he arrived at the 2015 contest with a unique distinction that only a handful of surfers can claim. Bells is the longest-running surf contest in the world, with challenging conditions that make winning here a particular honor.

It might have been that brag-worthy track record that got him fired up for his Quarterfinal. Fanning struck first, and struck big. Breaking out his signature, wrapping turns that have served him so well here before, he scored an 8.33 and quickly followed it up with a 9.43. Despite a solid effort from Jordy Smith (ZAF) — who has power-turns to spare — the polish just wasn’t there. Fanning’s heat win was imminent in the first 10 minutes.

The last Quarterfinal pitted current Jeep ratings leader Filipe Toledo (BRA) against former rookie of the year Nat Young (USA). Things were going according to plan for the rising Brazilian star — until Young found his footing. Toledo lacked some of the can’t-fail fire that saw him blow minds on the Gold Coast, and couldn’t find the scores he needed. This time, it was Toledo’s dad who alternately cheered and cringed from the sidelines.

“It was a tough one against Nat and he’s been surfing really good,” said Toledo. “I’m still happy and this is a really good result and a keeper for me for the rest of the year. I had a couple of mistakes out there with priority and I should have tried some maneuvers. I’m happy though and looking for another good result at Margaret’s. I’m stoked and thank you to everyone who’s been supporting me.”

In the Semis, the battles got fiercer. Fanning and De Souza led the field and headed to the Final, in a matchup that would prove to be the most exciting of the day. The two surfers each did what they do best: Powerful, wrapping turns; excellent rail work and total control on the waves. Their efforts earned them matching heat totals (Fanning: 8.17 + 7.10, De Souza: 7.50 + 7.77). But Fanning’s 8 broke the tie, and he became a four-time champion of the Rip Curl Pro Bells Beach, a feat that has only been accomplished four times before. With the fourth bell, he joins the elite ranks of some of the world’s most accomplished surfers, Kelly Slater (USA) and Mark Richards (AUS), Lisa Andersen (USA) and Gail Couper (AUS) (who, by the way, holds the world record at Bells with 10 titles).

Fanning’s win has yet another bonus for him: He booted Toledo out of the top spot on Tour and will head into the next event, at Margaret River, as the new leader. Because he finished as World No. 2 in 2014, he came into the new season seeded higher than Toledo, who (finished 2014 at No. 17). The upshot? Things just got real for the Title race. Get ready for a freshly shaken playing field when the Top 34 paddle out in Western Oz.