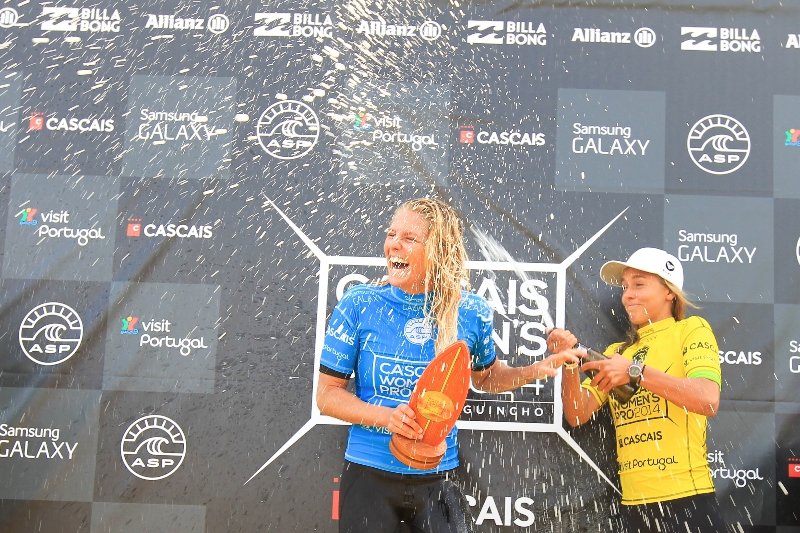 While John John Florence was enjoying barrel after barrel on the French coast at the Quiksilver Pro France 2014, the Women’s Tour headed south to the Cascais Pro in Portugal.

The penultimate event, in the 2014 10-stop world tour, the Cascais Women’s Pro was a vital competition on this year’s calendar, offering crucial points towards requalification.

The pack was whittled down until only two surfers remained, world-rankings leader Sally Fitzgibbons and the title-race frontrunner Stephanie Gilmore. The Final as expected, was a real powerhouse battle. Though Gilmore could no longer clinch the Championship in Portugal, a win at Cascais would see her overtake Fitzgibbons in the rankings and give her the yellow jersey for the final event in Maui.

Gilmore struck first, winning the opening exchange by a narrow margin. She won the second exchange with a midrange score for multiple forehand hacks, but Fitzgibbons fired back quickly, managing two closing maneuvers. Her efforts earned her a 7.17 and the first lead change with 20 minutes remaining.

But Gilmore answered in a big way. She raced down the line throwing powerful, vertical hacks to earn the first nine-point ride of the day — the third of the event — and force Fitzgibbons to hunt down a high score in the backend of the heat. Fitzgibbons found a wave and improved her two wave total, but it wasn’t enough to overtake the heat leader. Gilmore won the event Title by a fraction of a point, and with it came the yellow jersey. It would be her first time at the front of the rankings pack all year.

Following the event only Gilmore, Fitzgibbons and Tyler Wright remain in contention for the 2014 surfing crown, which will be decided at the final event of the year, the Target Maui Pro.