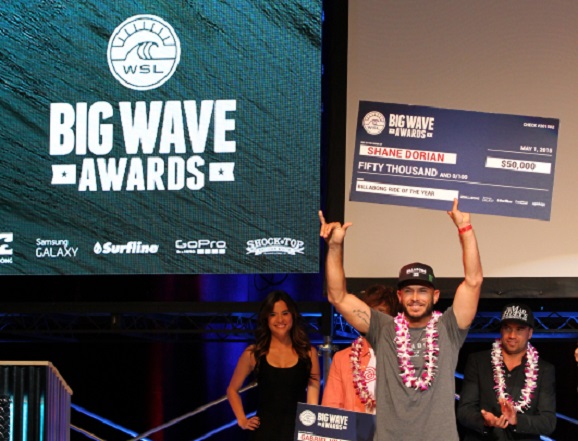 The world’s best big wave surfers gathered in Southern California over the weekend for the 2015 WSL Big Wave Awards. The gala ceremony at the Grove Theatre in Anaheim honoured the greatest rides of the last year and honoured the tenets of the big wave community.

“It was another spectacular year of big wave surfing, all around the globe,” said Bill Sharp, Big Wave Award Event Director and Founder. “This year there is a complete assortment of countries where amazing waves were ridden. It might even be the most internationally represented season ever in the 15 years since I started the Big Wave Awards.”

This year’s event was highlighted by the official crowning of last season’s WSL Big Wave Tour (BWT) Champion, Hawaiian Makuakai Rothman, who accepted via satellite from South America following his emphatic victory at the Quiksilver Ceremonial Chile this morning at Punta de Lobos. Some 2,000 invited VIPs witnessed the awards ceremony in person and viewers worldwide tuned into the live streaming webcast of the entire proceedings.

Surfer Mag were there and gave some interesting insights into the crowds reactions.

“First, people love, and I mean love, Brad Domke’s skimboard act at giant Puerto,” wrote Surfer Mag Writer Justin Housman. “By far the biggest applause and the most riotous shouting went down when his rides were flashed on the big screen. When Domke came in fifth for “Ride of the Year,” there was a stunned silence. Second, somebody finally figured out how to shoot Nazaré from the proper angle, and that wave is massive. Absolutely enormous and terrifying. Doesn’t matter if it doesn’t always break top-to-bottom. When viewed from the front, not from above, all doubt is scoured away.”